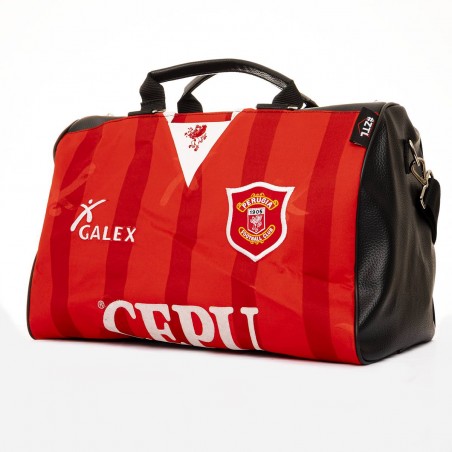 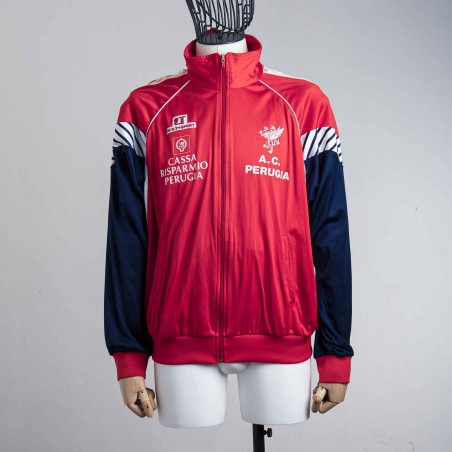 Perugia full zipper jacket season 1991/1992 red color with white and blue inserts. The AC Perugia logo and lettering are painted on the front, heart side, while the logo and lettering of the commercial sponsor Cassa di Risparmio di Perugia are painted on the right side, along with the sewn-in logo of the technical sponsor 2T Sport. The coats of arms of Perugia are in the weave on the shoulders.

The Perugia lived a period of stasis, from years it did not succeed to return in the greater soccer and it barcamenava between C and B. In this season there was but the point of turning with the acquisition of the society from part of Luciano Gaucci. 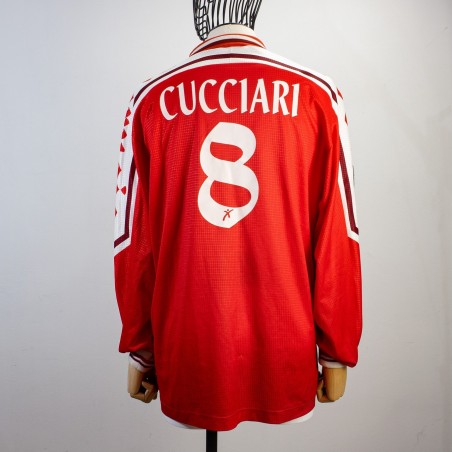 Race jersey in perfect condition and excellent condition. Present inside the manufacturer's label with size XL.

Long-sleeved jersey of Perugia 1997/1998 season. Colussi commercial sponsor logo applied on the front, Cucciari lettering and number 8 on the back. Perugia logo sewn on the heart, Galex logo embroidered on the left side. Year of the society "1905" sublimatic right sleeve, lettering "Perugia" in the weft of the fabric on the left sleeve. Polo style collar without buttons, Football League patch sewn on the right sleeve.

In the season 1997/1998 the Perugia, just gone down in Serie B, changed 4 times coach (Perotti, Bigon, Perotti again and then Castagner) but equally succeeded to reach the A thanks to the play-offs. Cucciari, a good midfielder at the time, played 34 games and scored 2 goals.

CLASSIFICATION IN CHAMPIONSHIP: 4° (Serie B). 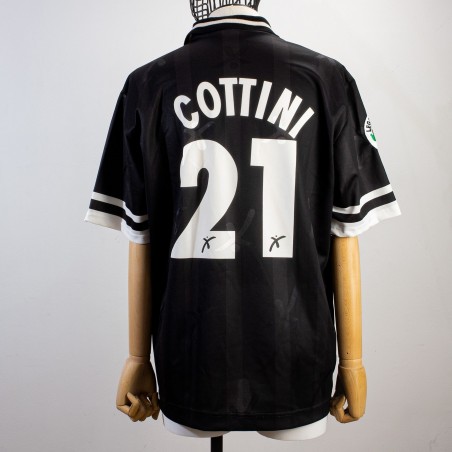 The beginning of the 96/97 championship is surrounded by a surreal atmosphere with the coach Giovanni Gqaleone and the Gaucci family increasingly at loggerheads. The team still gets a good number of victories and moves into a good ranking position. But the winter drop determines the long-awaited release of Galeone during the Christmas break. Surprisingly, Nevio Scala arrives. The debut is a nightmare, with Perugia taking 3 goals at home from a Reggiana reduced to ten. Scala brings with him Bucci, now second to Buffon in Parma, preferring him to Kocic, idol of the fans and one of the best in the team and who is sold to the Levante. Materazzi also arrives, returning from the loan to Carpi. A case apart from that of the experienced Brazilian striker Muller, who will never leave his mark, with just 6 appearances and no goals. The first round ends with Perugia fourth from bottom to only one point from the safety share. In the turbulent Perugian season there are also the cases of Rapaic, protagonist of the arm goal with Napoli that effectively puts an end to the career of the referee Nicchi, and that of the very young Gattuso, who literally disappears from the sports center to reappear in Glasgow to sign a billionaire contract with Rangers, taking advantage of the absence of legislation that protects the clubs of origin. Meanwhile, in the league, Negri's goals and the clear 5-1 against Bologna bring Perugia back to just two points from the Piacenza-Cagliari duo. The draw in the direct clash between the two contenders allows Perugia to join two days from the end, which then becomes a comforting +3 on both. But the last day is very bitter for Perugia, which loses the direct match against Piacenza and above all pays the big blow of Cagliari at San Siro over Milan. The detached classification expels the Umbrian team from the play-off.

CLASSIFICATION IN THE CHAMPIONSHIP: 16th 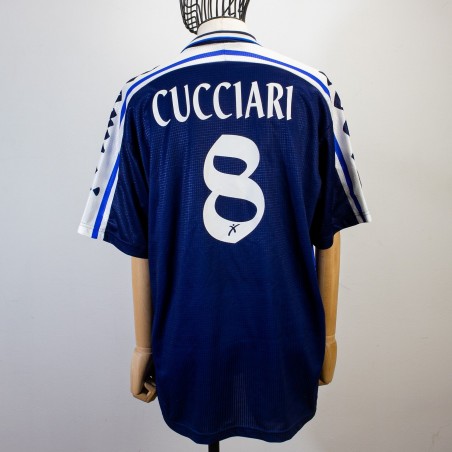 Perugia in the 97/98 season after a long run-up wins promotion to Serie A thanks to the victorious play-off on penalties against Turin. Initially the bench is entrusted to Attilio Perotti who after a few weeks is replaced by Alberto Bigon. A few months later Perotti is called back for a second time but on 23 March the fourth bench change is made with the arrival of Ilario Castagner. For the first time the seasonal striker is a midfielder, Antonio Bernardini who scores 11 goals. The play-off in Reggio Emilia remains memorable after an exhausting series of penalties with the decisive seal of the "Cobra" Sandro Tovalieri. For the occasion, Perugia decides superstitiously to use the shirt worn by the "Perugia dei Miracoli".

CLASSIFICATION IN THE CHAMPIONSHIP: 4th 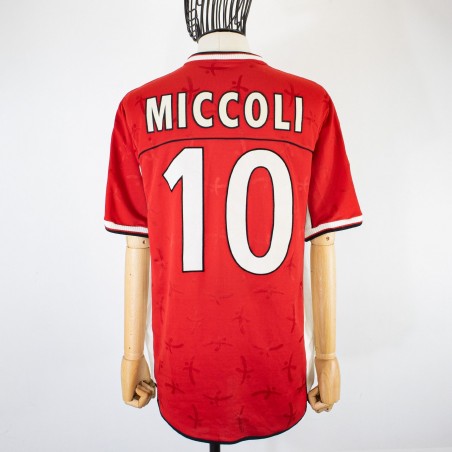 Perugia long sleeve jersey with Fabrizio Miccoli name and number. Product made by the technical sponsor Galex with Lega Calcio patch on the right sleeve. Inserts and applications have no defects. Product in good condition.

The colors retain their original brilliance

In addition to being Perugia's Top Scorer with 16 goals, Fabrizio Miccoli in the 2003/2004 season became the top scorer of the Italian Cup with 7 goals. 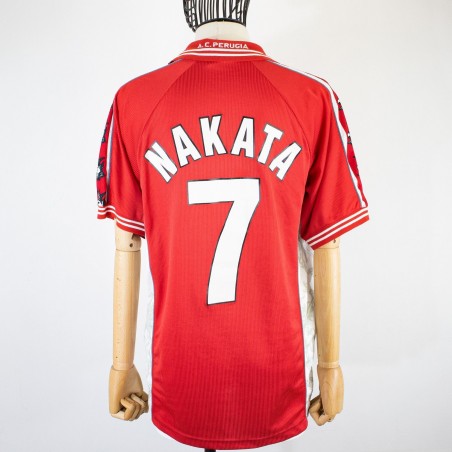 Perugia long-sleeved home jersey produced by Galex in the late 90s. Product in excellent condition, without defects in the fabric and inserts. Historic Perugia jersey with name and number Nakata 7.

The colors have not lost their vigor

In the middle of the 1999/2000 season, Japanese stalwart Nakata moved to Roma for 40 billion lire.