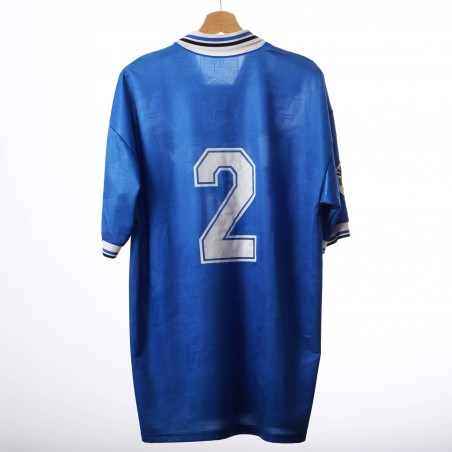 The jersey is in excellent condition, with no tears or signs of wear despite the passage of years.

Applied on the front, we have the team patch on the heart side and the ABM Logo on the right.

The number 2 is applied on the back in white light plastic, while the Lega Calcio patch is sewn on the right sleeve.

The commercial sponsor of the jersey is Brescia Lat.

The 1996/1997 season represents Brescia's third victory in Serie B, while the team was eliminated in the first round of the Coppa Italia. 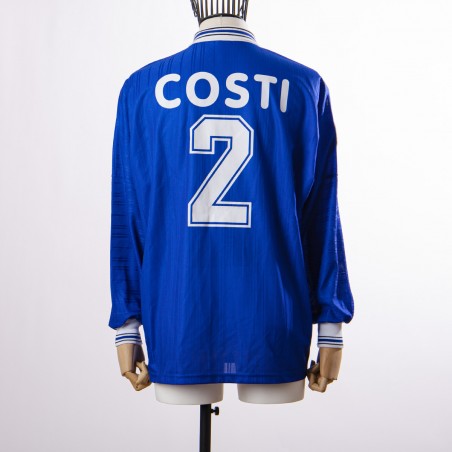 Brescia Vintage Soccer Jersey in Home version of the 1996/1997 season.

Short sleeve model with collar with integral button in contrasting white with blue and black stripes.

The jersey has a homogeneous color with a central V in white.

On the front the logo of the club and commercial sponsors are embroidered.

At the center the commercial sponsor BRESCIA LAT.

Internal label with made in Italy and size XL.

Led by Edy Reja, Brescia manages to win for the third time the Serie B championship, gaining the right to the Serie A. An unprecedented championship maintaining the first positions without ever going down in the standings. 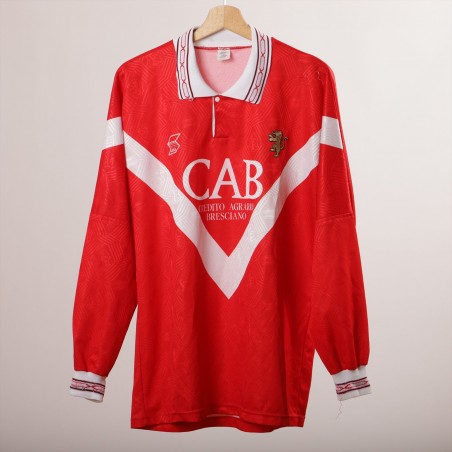 The jersey is in excellent condition, some imperfections on the fabric are due to the passage of years. Also present inside the manufacturer's label with size XL.

Brescia third jersey, football season 1994/1995. Red model with white inserts, short sleeves and polo collar with snap button. On the front is sewn the patch of Brescia heart side, while the technical sponsor Abm and the commercial sponsor CAB, are applied with sublimatic printing. 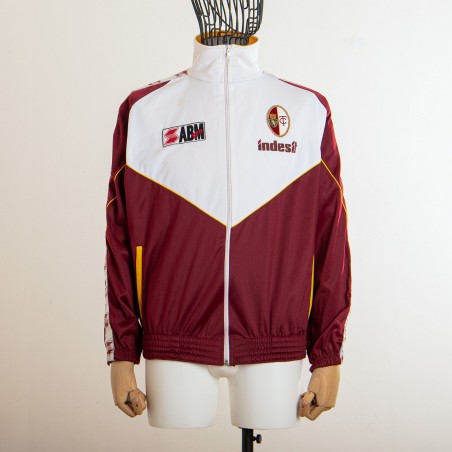 Torino jacket made for the club at the beginning of the 90's by the company ABM. Product in excellent condition, with sewn coats of arms and printed Indesit sponsor.

In 1991 Torino won their only international trophy, the Mitropa Cup. On June 4, 1991 they beat Pisa in the final with a comeback 2-1 after extra time. 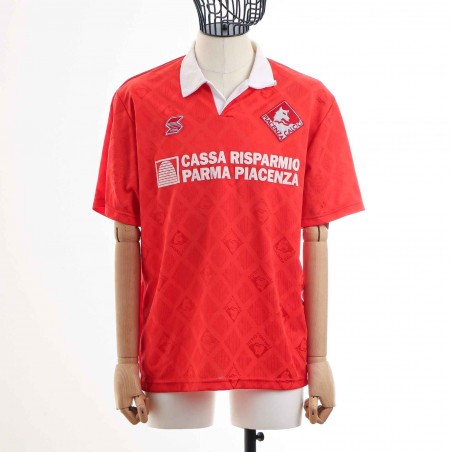 The Piacenza vintage football shirt is in good condition and the logos are not worn.

DETAILS
The Piacenza Vintage Home Shirt is made by ABM for the 1995/1996 football season. The red color is still bright. The Piacenza Calcio crest is repeated in transparency on the entire texture of the jersey. The club logo is in excellent condition as well as that of the technical sponsor. The label shows size L

ANECDOTES AND CURIOSITIES
For the first face in the history of the club, Piacenza led by Luigi Cagni manages to escape and remain in Serie A with one round to spare. 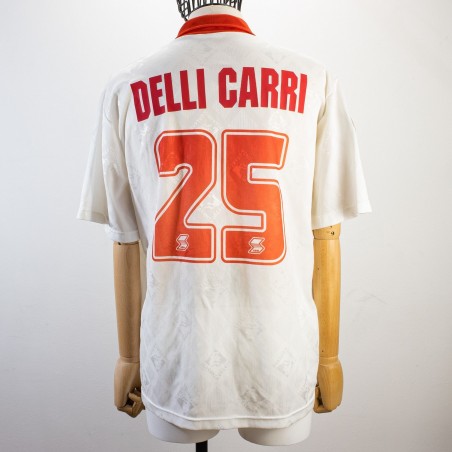 Discreet start for Piacenza in the 96/97 season, thanks above all to the contribution of the bomber Luiso. It is really a masterpiece of the 'bull of Sora' in reverse to put an end to the Tabarez experience at Milan, a team of which Luiso himself confesses to be an avid fan. The second part of the season sees the Emilian team struggling, with only one victory in 18 days and the absence of Luiso's goal which determines the loss of the place in favor of Tentoni. Meanwhile, at the last of the year, President Leonardo Garilli dies of a heart attack. However, the ranking remains bearable thanks to the 12 draws obtained in this long series. After the brilliant start to the season, Piacenza squanders the wealth of points finding themselves fighting for salvation against Perugia and Cagliari, for a single place that would guarantee salvation. The last phase coincides with the return of Luiso's goal in the home draw with Fiorentina. The last two home games determine the entire season. The draw with Cagliari knows of a wasted opportunity and leaves a bad taste in the mouth, but in the last decisive day Piacenza dominates Perugia gaining access to the play-off against Cagliari thanks to the detached classification. At the San Paolo in Naples there is no history and Cagliari is stunned with a dry 3-1, which sees the usual Luiso as protagonist. In the end there is also the satisfaction of Di Francesco's call-up to the national team for the Tournament of France, which the player will have to renounce to play the safety play-off. 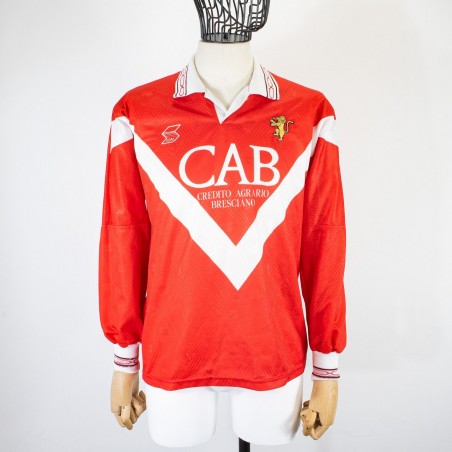 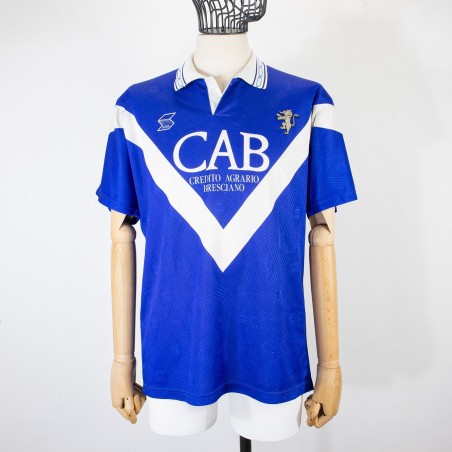 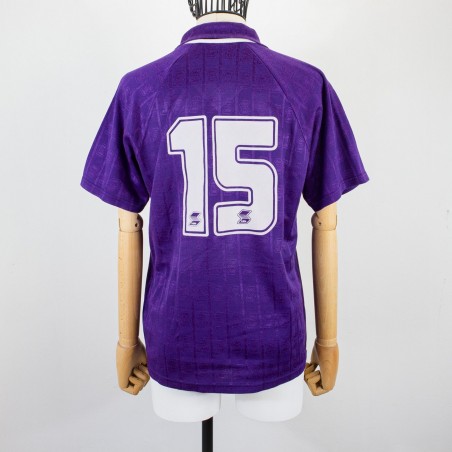 The shirt is in good condition and retains intact details and seams. The fabric has some imperfection or felting due to the signs of aging. Applications, embroidery and badges are intact and have no imperfections.


ANECDOTES AND CURIOSITIES:
Fiorentina's 1990/1991 season did not start in the best way. The club sold the champion Roberto Baggio to Juventus, unleashing the wrath of the purple fans. The championship ended with a dull 12th place. 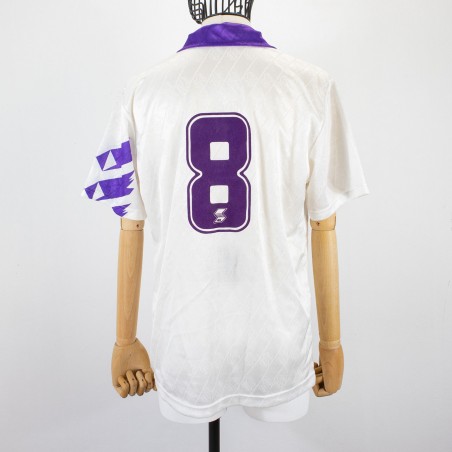 The Fiorentina vintage away shirt has the original characteristics intact, it has no defects or discontinuities in the fabric and seams. The applications, the embroideries, the weft and the ribbed inserts of the collar are in excellent general condition. The shirt is in excellent condition

The colors of the shirt retain their original brilliance.
as no imperfections and is characterized by transverse stripes alternating with the logo of the technical sponsor ABM
The club crest is sewn on the left side
The commercial sponsor is painted purple
The ABM logo is sewn on the right side
The customization is in velvet flock with ABM logo

ANECDOTES AND CURIOSITIES:
In 1990 the Pontello family ceded the majority package of the team to Mario Cecchi Gori, starting an adventure that lasted just over ten years. The Cecchi Gori family managed the team in the following years with mixed results. 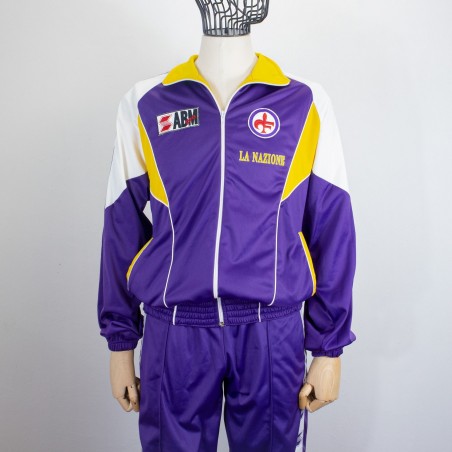 Fiorentina TRACKsuit made by ABM for the 1989/1990 season in excellent condition. The garment is like new except for a small imperfection on the application of the sponsor La Nazione on the heart side of the jacket. It has no discontinuities or defects of any kind

Viola fans will surely remember the first league match in which the team succumbed at the Olimpico against Roma. The Giallorossi won with a resounding 4-0 against the Tuscans, foreshadowing a season that was anything but simple. 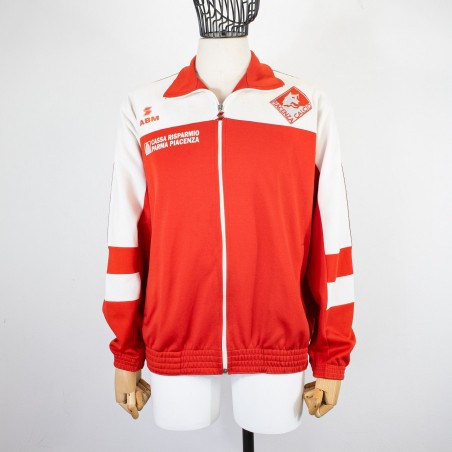