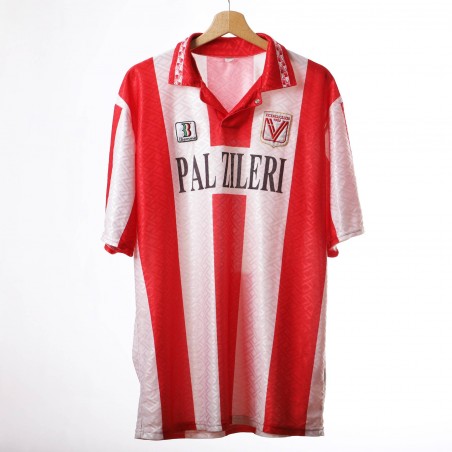 The jersey is in very good condition. Despite the passage of years, no tears are present. Inside label with XXL size.

Home model of the Vicenza jersey produced by Biemme for the 1996/1997 football season. Classic pattern with vertical red and white stripes. Both the sqaudra patch and the Biemme technical sposnor logo are sewn on, while the Pal Zileri commercial sponsor is in sublimation. Polo collar with snap button. 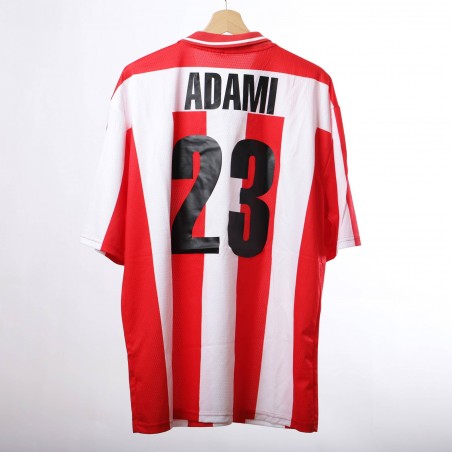 Jersey in excellent condition, like new, without stains or halos. Present inside label with size XL.

Home Vicenza model produced by Biemme in the 2004/2005 season. Half-sleeve and polo collar, patterned with red and white vertical stripes. Stitched team patch on the heart side and Biemme technical sponsor applied on the right. The commercial sponsor is Caffè Vero and is applied in light black plastic in the centre. 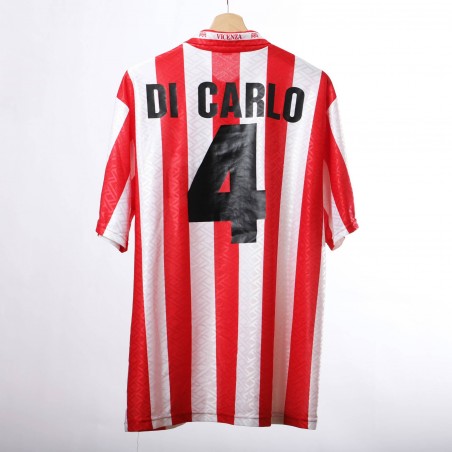 The jersey is in excellent condition and in bright, vivid colours. Inside label with size XL.

Jersey produced by sponsor Biemme for the 1993/1994 season. Short-sleeved model with classic red and white vertical stripe pattern. Polo collar with snap button. All applications on the front are in sublimation. On the back, on the other hand, the DI CARLO 4 personalisation is applied in black light plastic. The commercial sponsor of the shirt is Pal Zileri. 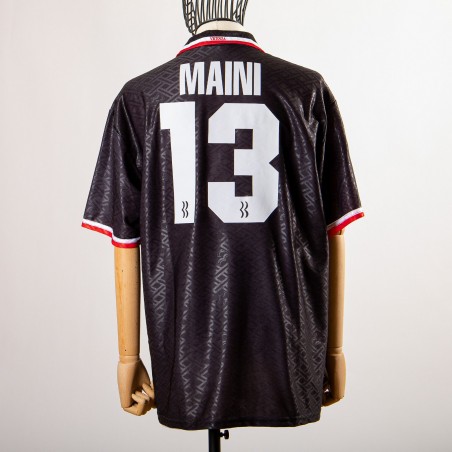 Vicenza's third jersey, 1996/1997 season, appears to be in excellent condition.

Inside is the manufacturer's label with size XXL.

Black model with white and red details, with polo collar with button and short sleeves.

The customization on the back is MAINI 13.

On the right sleeve, is sewn the patch of Lega Calcio. 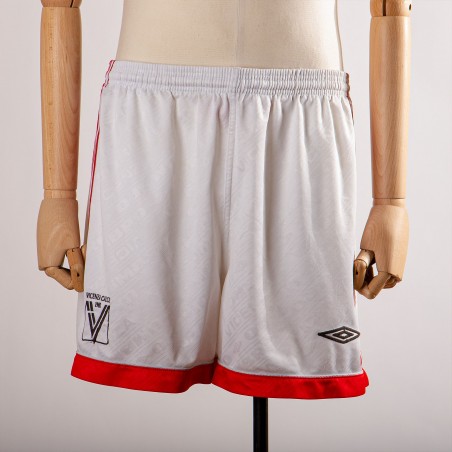 The Vicenza home shorts, from the 2000/2001 football season are in fair condition. Also present inside the manufacturer's label with the size L.

The shorts are white with a red leg border and side bands with the Umbro logo. The shorts have the embroidery of the technical sponsor on the left leg and the team patch on the left. 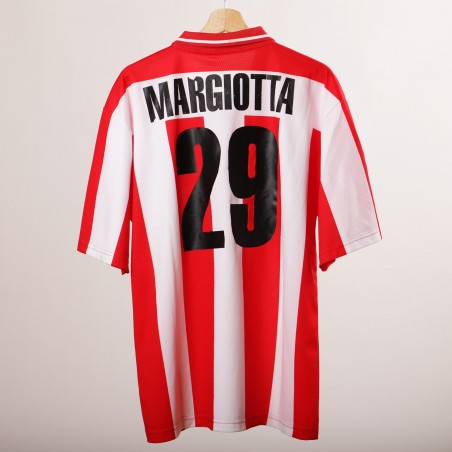 Jersey in good condition, the fabric is free of imperfections, while the customization is worn out due to time. Present manufacturer's label with size XL.

Vicenza first jersey of the 2004/2005 season. On the front, the team patch is sewn on the heart side, while the technical sponsor Biemme and the commercial sponsor Caffè Vero are applied in black velvet. On the back are printed black lettering MARGIOTTA and the number 29. Applied on the right sleeve, the Lega Calcio patch in flock. 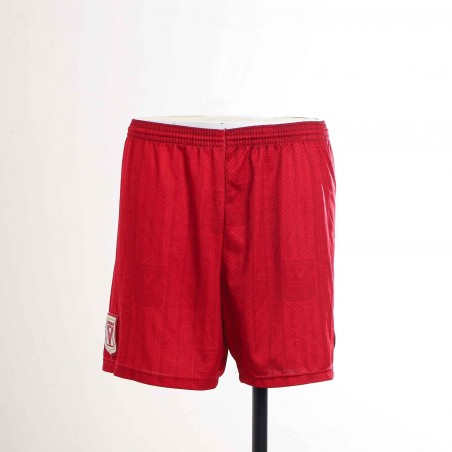 It was a failed season for Vicenza culminated with relegation, just two years after winning the Coppa Italia. It was a year of changes for the refereeing sector. The red card was inserted for fouls from behind and the draw was tried instead of the referee designation, an idea that was immediately set aside after a year of practice. 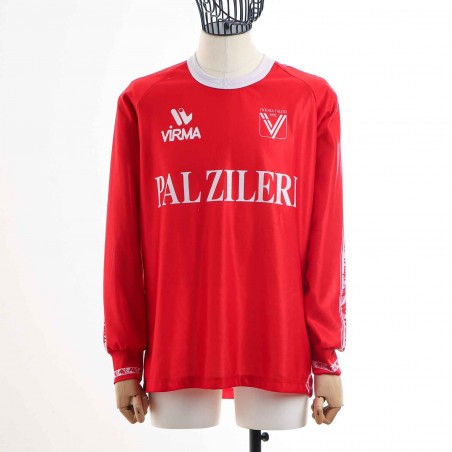 Vicenza training shirt kept in excellent condition, the fabric is soft to the touch and logos intact.

DETAILS
The Vicenza training shirt was made by Virma for the 1994/1995 season. It is red with a white choker. Sleeve saddle band that recalls the logo of the commercial sponsor. Main Sponsor Pal Zileri. Internal label size XL.

ANECDOTES AND CURIOSITIES
A splendid season for Vicenza football which, coached by a young Francesco Guidolin, arrives 3rd in Serie B, winning promotion to Serie A. 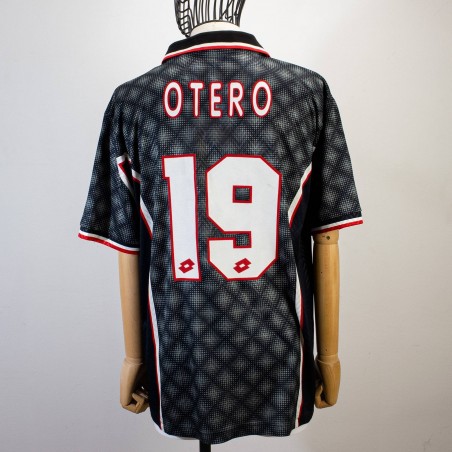 Condition, excellent, year 97-98, name and number Otero 19, with spots on the back and a smudge of red on the name. Perfectly maintained patches, Lotto technical sponsor, Pal Zileri commercial sponsor.

The successes of the field during the previous season were contrasted by the problems of the company. The fuse was the seizure of the shares of the Carbonare Group, to which Vicenza was involved, at the hands of the Court of Milan in January 97. The English of Enic saved Vicenza Calcio from bankruptcy in 1997, with the aim of redoing the Romeo Menti, make it a city stadium. The Vicenza thus becomes the first Italian company of foreign ownership. In the midst of the indifference of local entrepreneurs, therefore, it was Julius's suitcase that saved Vicenza Calcio from an almost certain failure. The Englishman, head of the British holding company Stellican, led a consortium also made up of another English company, Enic, particularly busy at the end of the nineties in taking over football clubs in crisis. These include Tottenham Hotspur, Glasgow Rangers, Slavia Prague, AEK Athens and Basel as well as Vicenza itself. 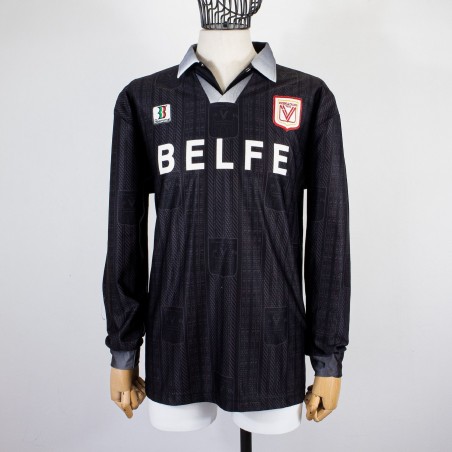 The shirt is in excellent condition, the fabric is excellent and has the original characteristics, soft to the touch, with intact seams, no halos and color discontinuities. Size 5 label on the collar.

Biemme logo applied on the right.

Belfe sponsor in white velvet applied to the center.

Vicenza logo sewn on the left side.

it is no longer Vicenza who won the Italian Cup with Guidolin but a team that unfortunately fails to stay in Serie and slips to B reaching 17th place.TOP PLAYERS:  Ambrosetti, De Carlo, Negri, Otero, Aurelio 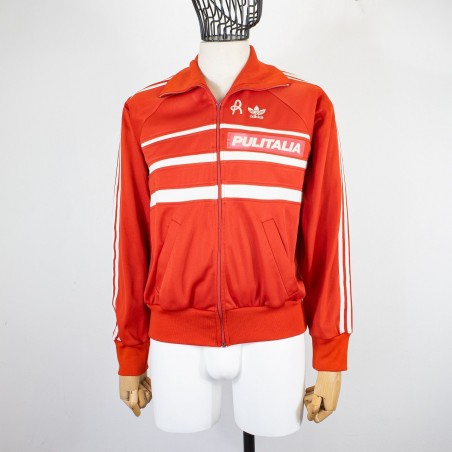 The jacket is in excellent condition, the fabric is in good condition and has the original characteristics. There is no size label. Large fit.

Adidas logo in white embroidered on the left.

The Pulitalia sponsor was applied over the previous sponsor,

Jacket that belonged to the goalkeeper of the youth sector Ennio Dal Bianco with the number 14.