The jersey is in excellent condition, the fabric is excellent and has the original characteristics. Also present inside the label with the size M.

"Winning the Ballon d'Or is like crowning a childhood dream. An unforgettable moment." So said Lothar Matthaus in the winter of 1990 at the awarding of the Ballon d'Or. The Teutonic midfielder, author of an extraordinary season despite the few successes of the team, was able to win the prestigious award thanks to the performance offered in the 1990 Italian World Cup, won by West Germany. The German selection was dragged by the talent of the black and blue number 10 and not only: the decisive goal in the World Cup final, against Maradona's Argentina, was scored by the Inter left-back Brehme. 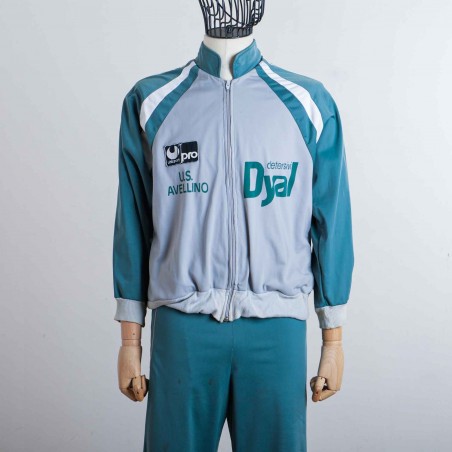 Preserved suit still in excellent condition despite the passing years. Inside is the manufacturer's label with the size "6".

Full zipper jacket and pants of Avellino 1986/1987 season. Jacket with zipper perfectly working, gray color with green and white inserts. On the front are screenprinted the logo of the commercial sponsor Detersivi Dyal and the lettering U.S.Avellino and sewn the Uhlsport logo, while on the back is painted in green the logo of the commercial sponsor. The pants are green with pockets with zipper fastening.

Avellino was led by the great Luis Vinicio and in this year closed in eighth place, a record in the history of the Lupi. The championship was won by the "cousins" of Maradona's Napoli, at their first national title. 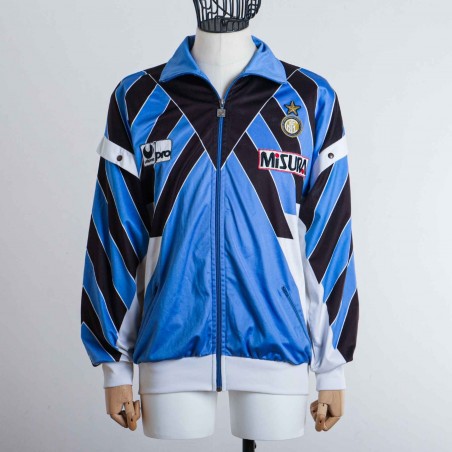 Jacket in excellent condition, preserved with details intact and with the inside label with size XL.

Light blue jacket with black and white inserts. Full zipper model with buttons on the sleeves to transform the jacket into a short sleeve uniform. On the front are sewn on the heart side the Inter logo, on the right side the Uhlsport crest and under the Inter logo the Misura crest. On the back, in the texture of the fabric, there is the lettering INTER.

Since 1990, Inter abandoned the Muggiani's Biscione and resumed the circle logo. The Nineties opened immediately with the victory of the UEFA Cup against Roma, but the turning point was given by the Moratti family. Massimo, Angelo's son, took over the club after almost 30 years of absence of the family from the company and began to invest heavily in the market obtaining the first success in 1997 with the victory of another UEFA Cup once again against an Italian team from the capital, this time however Lazio lost the final. 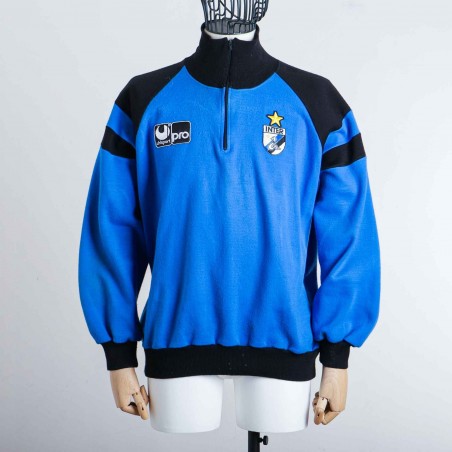 Preserved jacket in excellent condition with fully functioning zipper and intact details. Also present inside the label with the size XL.

Since 1979, and until 1990, the Inter logo was represented by the Biscione made famous by the illustrator Giorgio Muggiani. Uhlsport and Misura also accompanied Inter on its journey. The Milanese, in the meantime, taken over by the entrepreneur Ernesto Pellegrini, also won the 88 championship under the guidance of Giovanni Trapattoni.

TOP PLAYERS: Altobelli, Bergomi, Serena, Matthaus, Brehme.
CLASSIFICATION IN THE CHAMPIONSHIP: victory of the Scudetto in 1988, victory of the Coppa Italia in 1982. 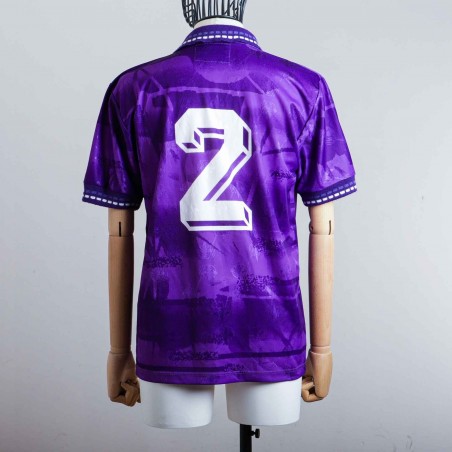 Home match uniform of Fiorentina season 1993/1994. Purple short-sleeved jersey with white inserts on the sleeves and cross collar. On the front, in the center, is applied a patch of the commercial sponsor Sammontana of the following season 94/95 above the sponsor of the season 93/94 7Up. On the right side is sewn the Uhlsport logo, on the heart side we find the logo of Fiorentina while on the back, sublimation, there is the number 2.

Fiorentina, relegated to B after 55 years, easily won the cadet championship. On the bench was called Claudio Ranieri that "promoted" the young Toldo, Flachi and Robbiati in a staff that could already count on Batistuta, Effenberg, Pioli, Baiano, Bruno and Iachini. The company passed to Vittorio Cecchi Gori for the first time after the death of the president and father "Marione" Cecchi Gori.

CLASSIFICATION IN CHAMPIONSHIP: 1° (Serie B). 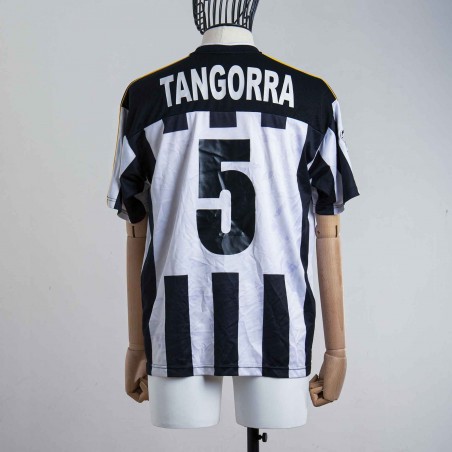 Shirt kept in good condition, there are no halos or particular imperfections that affect the performance of the fabric. Present inside the manufacturer's label with the size L.

Ascoli Calcio short-sleeved shirt season 2002/2003 produced by Uhlsport. Black and white color with yellow inserts, present in the center the sublimated logo of the commercial sponsor, just above the lettering UHLSPORT embroidered. On the heart side there is the crest of Ascoli while on the left sleeve there is the Uhlsport patch. On the right sleeve there is the Lega Calcio patch and on the back TANGORRA lettering and number 5 applied.

Ascoli in the 2002/2003 season was easily saved in Serie B, in a league that had among the participants emblazoned teams like Naples. To triumph was the Siena, thus earning his first historic promotion to Serie A. Capocannoniere was bomber Igor Protti, at the time to Livorno. Massimiliano Tangorra was Ascoli's starting defender and also scored 2 goals. 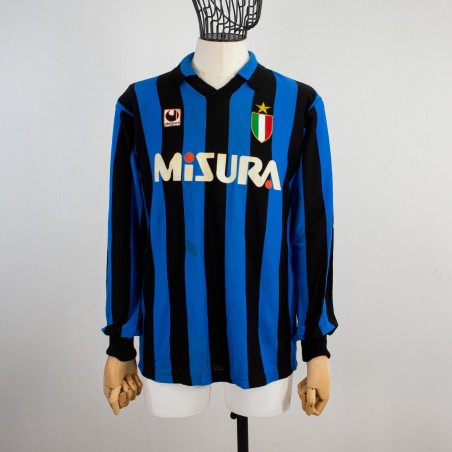 The jersey is in excellent condition, the fabric is well preserved and has the original characteristics, soft to the touch, the seams intact, no halos and discontinuity of color. Inside there is the original manufacturer's label with the size L.

The 1989/1990 season of Inter is opened by the conquest of the Italian Super Cup, won after beating Sampdoria in the final with the result of 2-0, signed by the young Cucchi and the bomber Aldo Serena. In the championship, however, Inter was not able to keep up with AC Milan and Napoli that fought for the tricolor until the last day, relegating Inter to the simple role of pursuer. Trapattoni was not able to repeat the "Scudetto of records", embroidered on the chest of the neroazzurri thanks to the splendid previous season. The neroazzurri finished third in Serie A. 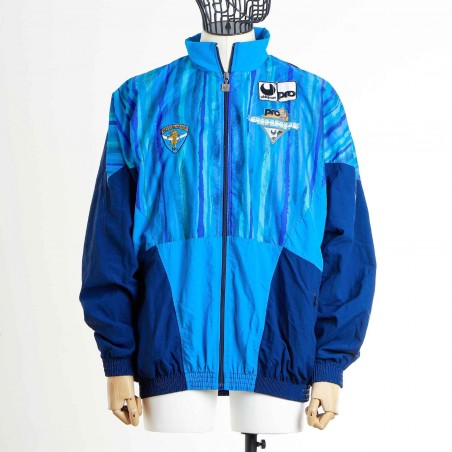 Jacket in perfect condition, beautifully preserved. Zipper fully functional, also present the label with the size and engraved with a number 4 to attest the authenticity of the product.

Brescia full zipper jacket of the season 1991/1992. Light blue color with inserts in blue and white. Uhlsport Pro logo sewn on the heart side and applied in color a little lower, Brescia logo sewn on the right side.

The Brescia of the 1991/1992 season was the author of a sumptuous ride that took him from B to A thanks to the goals of Maurizio Ganz. On the bench sat Mircea Lucescu, star of Romanian soccer and in the future an established coach at an international level, above all on the bench of the strong Shaktar of Donetsk.

CLASSIFICATION IN CHAMPIONSHIP: 1° (Series B).

Shirt kept in excellent condition, there are no serious fabric imperfections that detract from its beauty. The size label is not present.

Home match jersey of Cremonese in the Serie A season 199571996. Grey and red striped long sleeve jersey, Cremonese logo stitched heart side and Uhlsport logo left side in stitching. Commercial sponsor "Salumi Negroni" in the weave of the fabric.

Cremonese in the 1995/1996 season was not exciting and relegated to Serie B under the guidance of Gigi Simoni. In Serie A it was the first year with the three substitutions and with the numbers from 1 to 99 and the surnames behind the shirt. 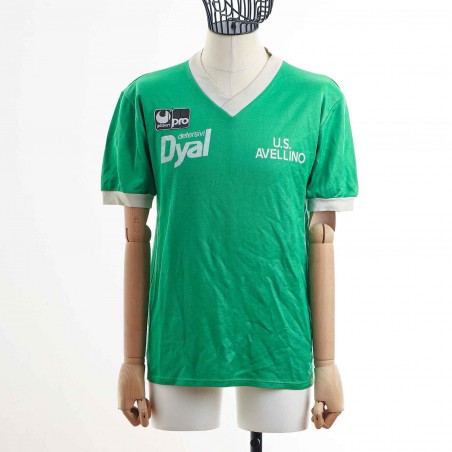 The shirt is in excellent condition and state of conservation without seams and imperfections. Size L, also present the manufacturer's label.

Green training T-shrt used by US Avellino footballers during training in the 1986/1987 season. The shirt features white inserts on the V-collar and sleeves and the Uhlsport logo sewn on the right side. The U.S. lettering is screen-printed on the chest. Avellino and Detersivi Dyal, commercial sponsor of that season.

The Avellino in the 86/87 season is coached by the champion Luis Vinicio and obtained the eighth place, the best result ever in Serie A for the Irpini. The championship was won by the "cousins" of Napoli di Maradona, the first in its history.

CLASSIFICATION IN THE CHAMPIONSHIP: 8th. 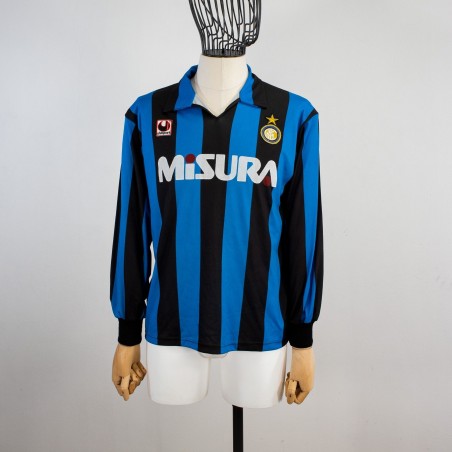 The Serie A championship, following the 1990 World Cup in Italy, won by West Germany led by Lothar Matthaus, sees Inter start with the favor of forecasts, together with Milan, Naples and Juventus. The first part of the championship is in fact dominated by the team led by Giovanni Trapattoni who graduated as winter champion albeit with a small advantage over Milan (1 point) and the trio Juventus, Sampdoria and Parma (2 points). Unfortunately for the neroazzurra team, it will be Sampdoria to win the tricolor thanks also to the victories of the Sampdoria team in the direct clashes. The neroazzurri will finish this championship only in third place, on a par with Milan. The team’s only joy this season is the European success in the Uefa Cup, won by Inter in the double final against Roma.

The shirt is in good condition, the fabric generally retains its original characteristics, except for small imperfections, does not show opacity and discolorations

Inter's 1989/1990 season opened with the conquest of the Italian Super Cup, won after beating Sampdoria in the final with the result of 2-0, signed by the young Cucchi and the striker Aldo Serena. In the league, however, Inter failed to keep pace with Milan and Napoli, who fought for the flag until the last day, relegating Inter to the simple role of pursuer. Trapattoni was therefore unable to repeat the "scudetto of records", embroidered on the chest of the neroazzurri thanks to the splendid previous season. The neroazzurra team will finish in third place in Serie A.