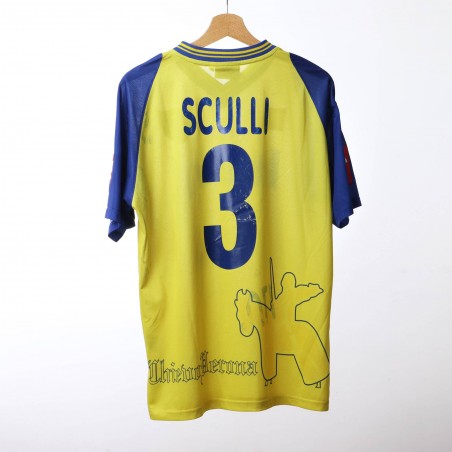 Jersey in very good condition except for worn personalization and a few haloes. Inside manufacturer's label with size L.

The Chievo Verona jersey features the colors yellow and blue , it is a short-sleeved model with a V-neck.  On the front is sewn the Chievo Verona patch on the heart side, while on the right side is applied the Lotto logo that we also find on the sleeves. SCULLI 3 personalization applied on the back in light blue plastic. The commercial sponsor is Paluani. 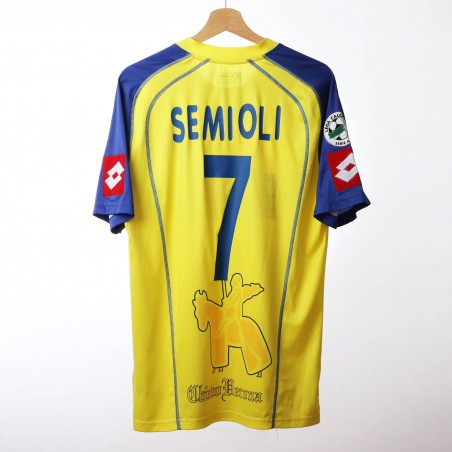 The jersey is preserved in very good condition with all applications intact. Lotto label inside with the size L.

Yellow model with royal blue details and short sleeve. Sewn team patch on heart side and Lotto logo under the neckline. The commercial sponsor is Cattolica Assicurazioni. Blue SEMIOLI lettering and the number 7 are printed on the back. 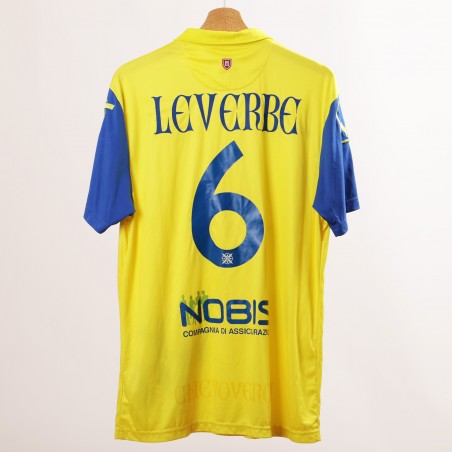 Chievo's first jersey, from the 2020/2021 football season, is like new, with no defects or imperfections.

Inside we still find the manufacturer's label with the size L.

Yellow model with royal blue details, short sleeve with buttoned polo collar. The team patch is applied on the heart side, while the technical sponsor Givova is embroidered on the right.

On the back are printed lettering LEVERBE and the number 6.

The commercial sponsors of the jersey are Mitsubishi, Coati, Nobis and Avella. 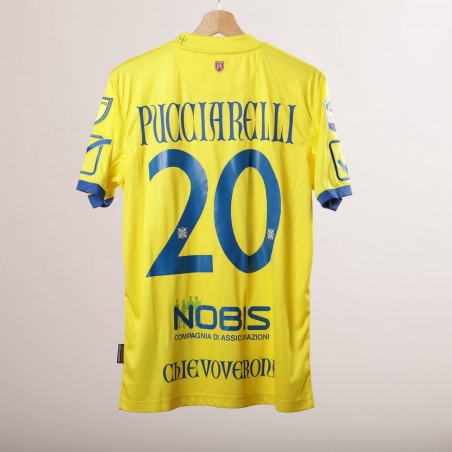 The jersey is in excellent condition. The manufacturer's size M label is still inside.

Home version of the Chievo jersey, football season 2017/2018. Short sleeve model with crew neck and buttons. Yellow colour and blue inserts. The front of the shirt is embellished with the Chievo patch on the heart side and the embroidery of the logo of technical sponsor Givova in the centre. The commercial sponsors Coati and Viviani are also applied. On the back is the blue PUCCHIARELLI 20 logo and the other commercial sponsor Nobis. Finally, the Serie A patch is applied on the right sleeve. 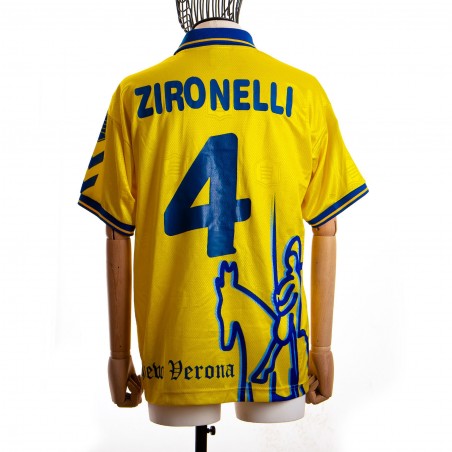 Preserved jersey in excellent condition. Also present inside the label with the size XL.

This is the year of Chievo Verona's historic promotion to Serie A, won at home with a 2-0 victory over Salernitana with goals in the last twenty minutes by De Cesare and D'Anna.

CLASSIFICATION IN CHAMPIONSHIP: 3° (Serie B). 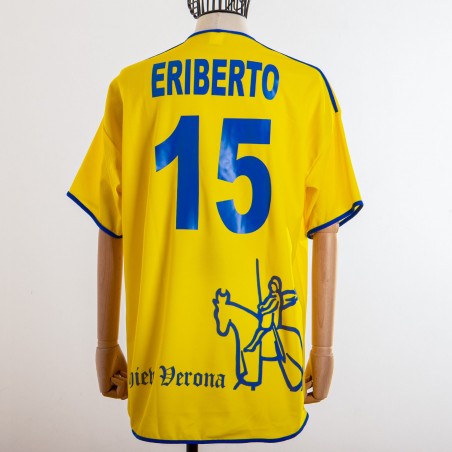 Preserved jersey in excellent condition. Also present inside the label with the size L.

On the front are sewn Joma and Chievo logos while they are sublimated Paluani logos and the effigy of Chievo. On the back are applied in blue the lettering ERIBERTO and the number 15.

This is the year of Chievo Verona's historic promotion to Serie A, which ended with a surprising 5th place behind AC Milan. At that time the player Luciano was still called Eriberto. In 2002 his true identity was discovered. A Brazilian businessman had given him a false identity in order to make him look younger and to make it easier for him to move to the clubs. 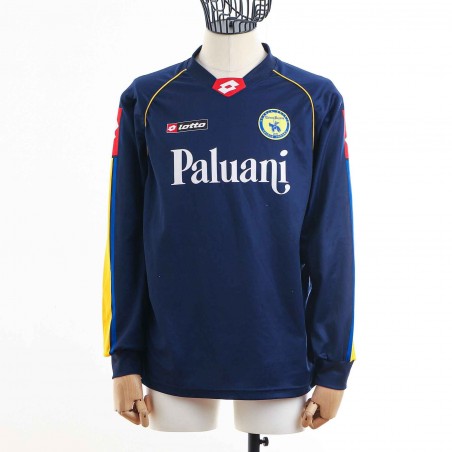 Preserved jersey in good condition, there is only one fabric imperfection on the abdomen. Present manufacturer's label with size L.

Chievo training shirt of the 2003/2004 season. Blue color with yellow inserts, long sleeves. Paluani logo on the front and back in the weave of the fabric, sublimation Lotto logo on the right side and on the sleeves, Chievo logo on the heart side sewn.

Those were the years of Gigi Delneri's great Cheivo, who managed to finish this season in ninth place. Siena played in a Serie A championship for the first time in its history.

CLASSIFICATION IN THE CHAMPIONSHIP: 9TH. 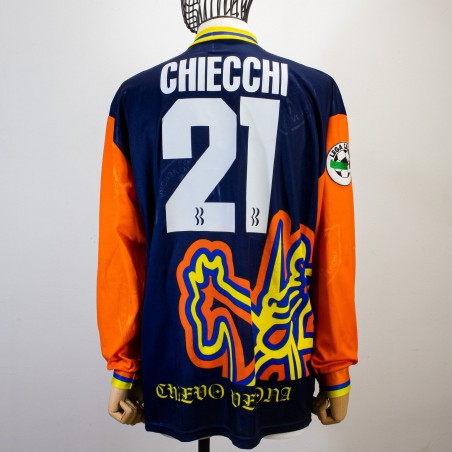 A young Silvio Baldini sits on the Chievo Verona bench in the 97/98 season. Unfortunately for Chievo Verona it was not an exciting season, in fact the Scaligeri will finish in 11th place with 50 points in 38 games played, scoring 43 goals and conceding 46. In that season the best scorer was Raffaele Cerbone with 12 goals. We remember the sale of the playmaker Stefano Fiore in the summer of 97 to Parma.

CLASSIFICATION IN THE CHAMPIONSHIP: 11th in Serie B. 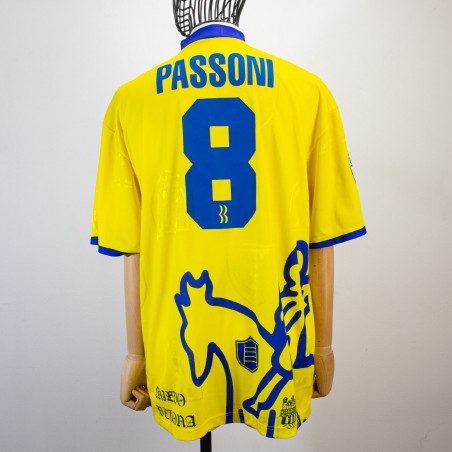 Perfect condition, soft to the touch, year 97-98, name and number Passoni 8. Presence of light spots on the back and one in particular on the N of the name, vivid yellow color, patches kept to perfection. Technical sponsor Biemme, commercial sponsor Paluani.

A season without infamy and without praise that of 97/98 for Chievo Verona, who in that season abandoned their hopes of winning the Italian Cup in the first round. Remember the 2-0 victory in the return derby against Verona with goals from Cossato in the 63rd minute and Zanchetta in the 86th minute.

CLASSIFICATION IN THE CHAMPIONSHIP: 11th in Serie B 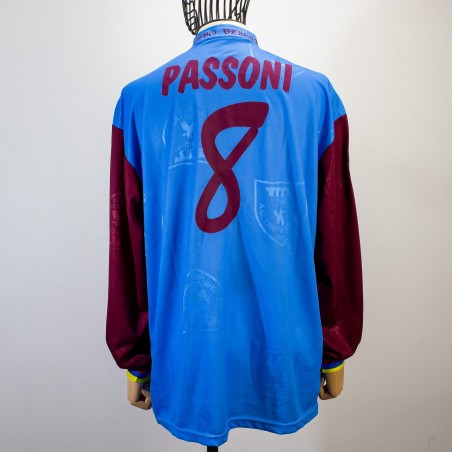 President Campedelli in the 97/98 season entrusted the technical leadership of the team to Silvio Baldini. The coach remains under contract with Chievo for the entire season and after the deleduous season which ended in 11th place; he migrated the following year to the Brescia bench. That year in the Scala ranks the veteran Cerbone showed off, who scored 12 goals in that season. Most appearances: D'Angelo and D'Anna with 37 overall appearances between cup and championship.

CLASSIFICATION IN THE CHAMPIONSHIP: 11th in Serie B 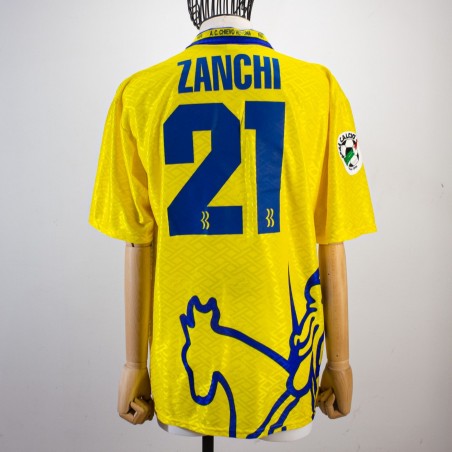 Vintage match shirt in excellent condition, year 96/97, Zanchi name and number 21, vivid colors, perfect patches and texture except for a miscoscopic thread pulled in the back.

DETAILS
Chievo Verona home shirt from the 1996/1997 season
Lega Calcio patch sewn on the right sleeve.
Biemme logo and Chievo logo in the plot. Paluani sponsor in sublimation. Name and number applied in blue on the back of the shirt.

ANECDOTES AND CURIOSITIES
Raised in the Atalanta youth academy, weaned by Emiliano Mondonico in the two-year period 94/96 with promotion from Serie B, Zanchi made his professional debut on the first day of the cadet, on 4 September 94, in the 1-1 draw at Chievo. He plays in Bergamo for two seasons, during which he collects 19 appearances. He began his tour of Italian teams in 96, to gain experience, the first is precisely in the team against which he made his debut, Chievo, then in Serie B, coached by Malesani, where however he will not find space and will be subsequently diverted on loan to Bari.

CLASSIFICATION IN THE CHAMPIONSHIP: 7th place 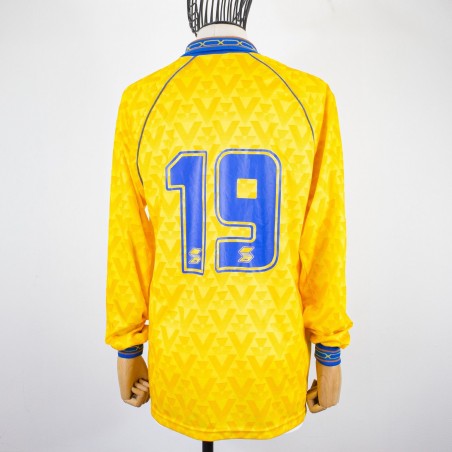 In 1989/1990 Osvaldo Bagnoli's Verona relegated to Serie B. The club was in great financial difficulties which were also reflected on the pitch.