Shirt kept in excellent condition, there are no serious fabric imperfections that detract from its beauty. The size label is not present.

Home match jersey of Cremonese in the Serie A season 199571996. Grey and red striped long sleeve jersey, Cremonese logo stitched heart side and Uhlsport logo left side in stitching. Commercial sponsor "Salumi Negroni" in the weave of the fabric.

Cremonese in the 1995/1996 season was not exciting and relegated to Serie B under the guidance of Gigi Simoni. In Serie A it was the first year with the three substitutions and with the numbers from 1 to 99 and the surnames behind the shirt. 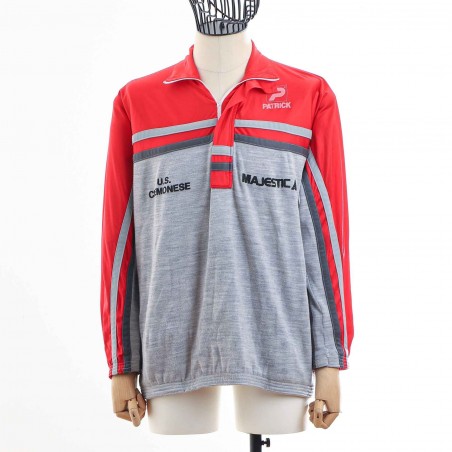 Cremonese 1989/1990 sweatshirt in good condition, the fabric is still soft and the logos are intact.

DETAILS: The sweatshirt made by Patrick for the 89/90 season is in gray with a portion of shoulders and sleeves in red. Half zip model. The Patrick logo is placed high on the left shoulder and a little further down the Majestic logo. On the right the lettering of the U.S. club Cremonese. The Majestic logo is large on the back

ANECDOTES AND CURIOSITIES: The 1989/1990 season saw the relegation of Cremonese to Serie B together with Udinese, Verona and Ascoli. A small joy in the Italian Cup for Cremonese who overcomes Brescia in the first round by winning at Rigamonti, but is eliminated by Milan, in the second round that crushes Zini. 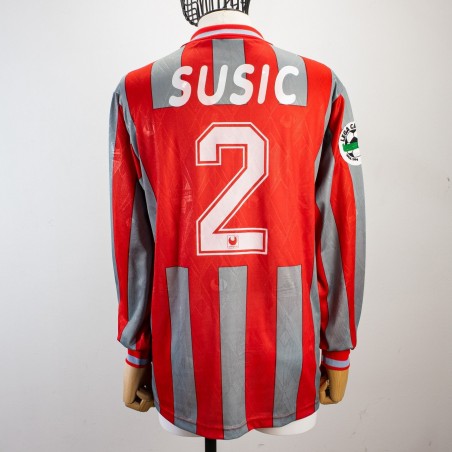 Vintage match shirt in perfect condition, year 96/97, name and number Susic 2, bright colors and technical stitching in order, the only defect is a slight scratching on the R of the commercial sponsor Negroni, technical sponsor Uhlsport.

DETAILS
Cremonese Home shirt from the 1996/1997 season
Lega Calcio patch sewn on the right sleeve.
Cremonese logo sewn. Negroni sponsor in double patent leather.
Name and number applied in white on the back of the shirt.

ANECDOTES AND CURIOSITIES
The second worst season of Cremonese, which after having reckoned in the previous season with relegation to B, in 96/97 ended the Serie B championship at the bottom of the standings, totaling 32 points in 38 games and consequently forced to relegation to C1 , even if unexpectedly reached the quarter-finals of the Italian cup that same season. Susic was bought in the summer of 96 by Parma with the aim of reinforcing the defensive department given his natural role as central defender.

CLASSIFICATION IN THE CHAMPIONSHIP: 20th place in Serie B

Official Cremonese sweatshirt made in the 'Le Felpe dei Grandi Club' collection created by Parmalat in collaboration with the main Italian clubs of the time.

The sweatshirt is in good condition and shows the signs of aging. Size L.