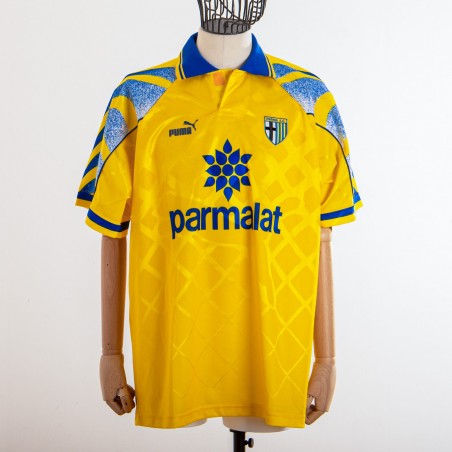 The jersey is in excellent condition, the fabric is excellent and has the original characteristics, soft to the touch, the seams intact, no halos and discontinuity of color. Also present inside the label with the size XL.

In the 96/97 season, an emerging Carlo Ancelotti took over the technical guidance of the Duchy of Parma, called to take over Nevio Scala's legacy on the bench; on the market front, the team was strengthened by the purchase of Chiesa and Crespo. In the championship, even though the team started with a promising 3-0 win against Napoli, the team suffered a poor performance, especially away from home. Particularly heavy were the defeats remedied against Inter and Udinese, with the gialloblu that in both cases suffered three goals after having passed in advantage. At the end of the first half of the season, however, Parma lifted its own destiny with a streak of four consecutive victories, which cost, among the others, AC Milan and Juventus, turning at the halfway point in fourth position. Led by Crespo's goals, the team finished the second half of the season in second place, its best result ever in the top category. 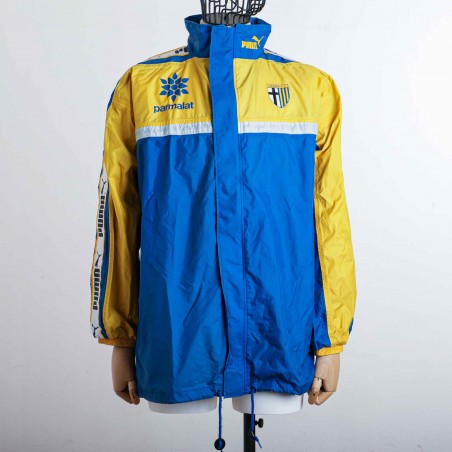 The home crowd record for the 1997/1998 season was 29809 people in attendance against Juventus on March 22, 1998. The match ended 2-2 with goals by Stanic and Crippa for the Ducal team and Tacchinardi and Inzaghi for the Bianconeri. 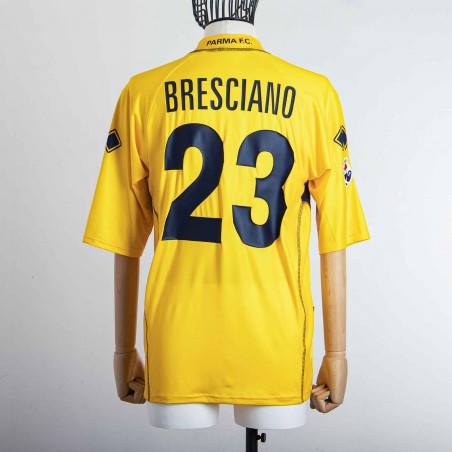 Shirt in perfect condition with no halos or tears. Also present inside the label printed with the size XL.

Parma Away Jersey 2005/2006 season with short sleeves. On the front appear the logos of the commercial sponsor Tecnocasa and Errea sublimation and those of Parma sewn on the chest, on the sleeves is sewn the patch Lega Serie A, and are sublimation Erra logos, while on the back are applied in yellow lettering MORFEO and the number 23.

Under the guidance of Mario Beretta Parma returned to Europe after only one year of absence. Mark Bresciano, born from Italian parents but Australian by nationality, was known for his exultation in which he stopped as if he had been petrified. 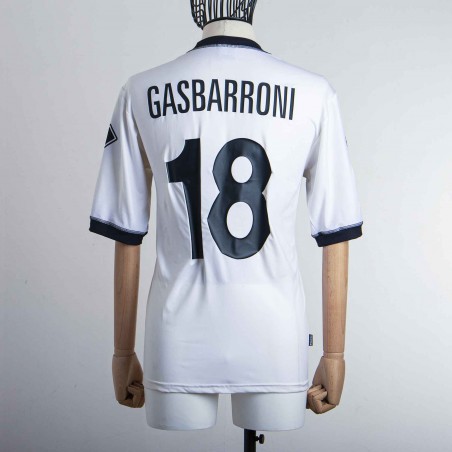 Preserved jersey in excellent condition, no halos or tears present. Also present inside the original label printed with size XL.

Parma Away Jersey 2005/2006 season with short sleeves. On the front appear the logos of the commercial sponsor Tecnocasa and Errea sublimation and those of Parma sewn on the chest, on the sleeves is sewn the patch Lega Serie A, and Errea logos are sublimation. On the back are applied in black the lattering GASBARRONI and the number 18.

In this season, the Parma club, in decline, was purchased by the entrepreneur Tommaso Ghirardi. Andrea Gasbarroni played 2 seasons in the Parma jersey, scoring 11 goals.

Preserved jersey in excellent condition with all details intact with no fabric imperfections. Present all 'inside the product label with the size M.

Home competition shirt with short sleeves. On the front are flocked Parma, Champion and Parmalat logos. On the back are applied the lettering BENARRIVO and the number 3 while on the back neck is sewn the lettering AC PARMA. The Lega Calcio patch is sewn on the right sleeve while the Champion logos are sublimated on the shoulders.

It was a particular season for Parma that had to say goodbye to Buffon and Thuram. In the championship the path was disappointing with 3 changes of coach (Ulivieri, Passarella and Carmignani) but the Ducali were still able to bring home a trophy: the Coppa Italia. Antonio Benarrivo is one of the most respected defenders of his generation and with Parma he played 13 seasons winning 7 trophies, 6 of which as a starter. 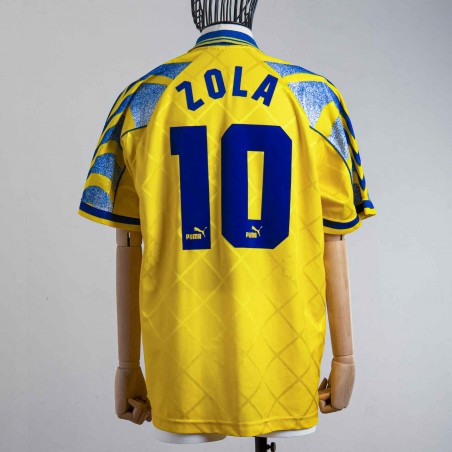 Parma's jersey with name and number of the star player Gianfranco Zola. Produced by technical sponsor Umbro in the 90s with flock applications and embroidery in fair condition. The customization in flock is excellent. The product if overall in excellent condition. Present inside the label with the size XL.

The colors of the blue inserts and the yellow background are bright and brilliant. Club crest sewn on the heart side. Parmalat commercial sponsor in sublimation in the weft. Zola 10 personalization in flock. Technical sponsor logo in light flock.

In the 1995/1996 season Gianfranco Zola scored 12 goals in 36 total appearances, memorable was his double at his debut in the Cup Winners' Cup in which Parma defeated the Albanians of KF Teuta 2-0 in an away match. Shirt in perfect condition with no halos or tears. Also present inside is the printed label with the size L.

Parma Away Jersey 2005/2006 season with long sleeves. On the front appear the logos of the commercial sponsor Tecnocasa sublimation and those of Parma and the technical sponsor Champion sewn on the chest, on the sleeves are sewn patches Champion and Lega Serie A, while on the back are applied in yellow lettering MORFEO and the number 10.

Domenico "Mimmo" Morfeo was one of the strongest players of his period when he was on the field, so much so that he was compared to Baggio and earned the nickname "Maradonino". Curiously, after leaving soccer he did not continue to work in that environment and preferred to open a restaurant in Parma and a shopping center in Avezzano. 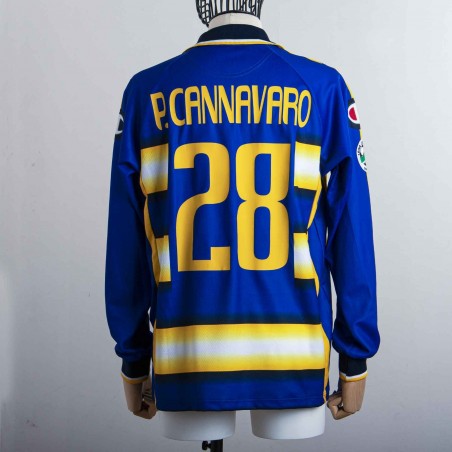 Shirt in perfect condition with no halos or tears. Also present inside is the printed label with the size XL.

Parma Away Jersey 2005/2006 season with long sleeves. On the front appear the logos of the commercial sponsor Tecnocasa sublimation and those of Parma and the technical sponsor Champion sewn on the chest, on the sleeves are sewn patches Champion and Lega Serie A, while on the back are applied in yellow lettering P.CANNAVARO and the number 28.

Paolo Cannavaro, a good defender, is the brother of the more famous Fabio and both have played with Parma. In the 2005/2006 season, coach Mario Beretta brought the Ducali back to Europe after a year's absence. 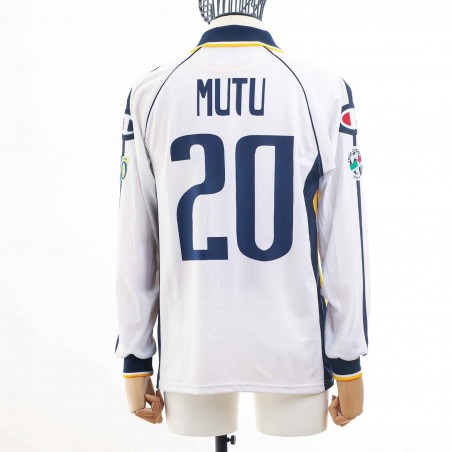 Shirt in perfect condition, stored like new. Also present inside the label with the size L.

Away match shirt of Parma season 2002/2003. Game uniform long sleeves white color with blue and yellow inserts and polo neck without buttons. Flocked logos both front and back. On the front we find the Parma coat of arms and the Parmalat and Champion logos. On the back are clearly visible the number 20 and the lettering MUTU. On the right sleeve there are the Champion and Lega Calcio Serie A patches, while on the left sleeve there are the Champion and 90 years of Parma Calcio history patches.

The 2002/2003 season marks the arrival of Prandelli on the bench and the Emperor Adriano in attack. Parma was defeated in the Supercup by Juve but managed to gain a place in the Uefa Cup at the end of the season. Due to the lack of an agreement with the TV stations, the championship was postponed until November. In the end Juve won but the championship was left without Fiorentina, bankrupt and forced to start again from Serie C2. Adrian Mutu played only this season with Parma, scoring 18 goals in 31 games. At the end of the season, Parma had to give in to the offer of Abramovich's Chelsea and sold the Romanian player. 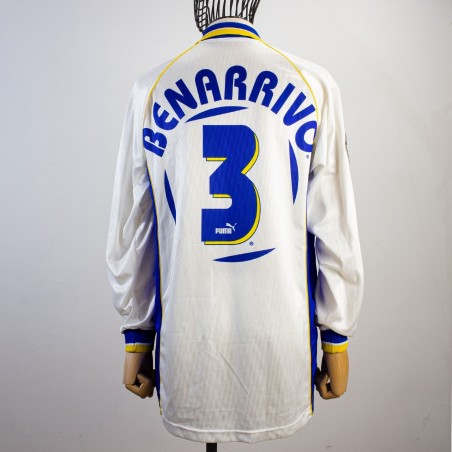 Shirt in good condition, except for a heart side imperfection just below the Parma logo. Present inside the label with the size XL.

Parma Home Jersey 1997/1998 season with long sleeves, white color with yellow and blue inserts. Parlamalat logo in the weave, as well as lettering and number 3 Benarrivo on the back. On the chest are sewn Parma and Puma logos, while on the right sleeve there is the Lega Calcio patch.

In the 1997/1998 season, Parma debuted in the Champions League but was eliminated immediately after a promising start. In the championship they managed to reach a European placement but Ancelotti resigned. Benarrivo played 13 seasons with the Ducal team, also scoring 3 goals. 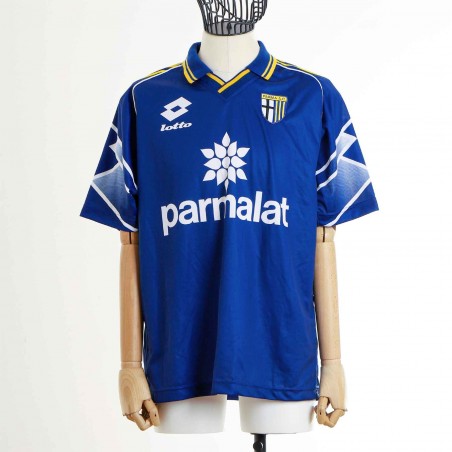 Shirt in excellent condition, stored with no imperfections in the fabric or inserts. Also present the manufacturer's label with size XL.

Parma training shirt with short sleeves and buttonless polo collar from the 1998/1999 season. Parma logo sewn on heart side, Parlmalat and Lotto logos in the weave fabric on the front, sleeves and back.

It was an unforgettable season for Parma in 1998/1999. With Alberto Malesani on the bench, Parma won the UEFA Cup and the Coppa Italia, also qualifying for the next Champions League. 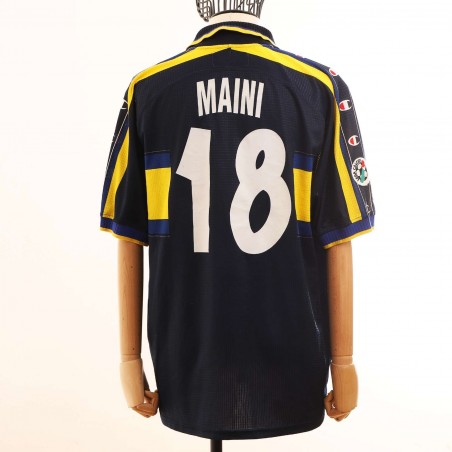 Parma shirt by Hernan Crespo made by the technical sponsor Champion for the 1999/2000 football season. Collectible product in perfect condition, with applications, stitching, texture and customization without any defects.

In the Italian Super Cup final played on 21 August 1999 at the San Siro stadium, Parma beat Milan 2-1 with goals from Crespo and Boghossian. .

CLASSIFICATION IN THE CHAMPIONSHIP: 5th