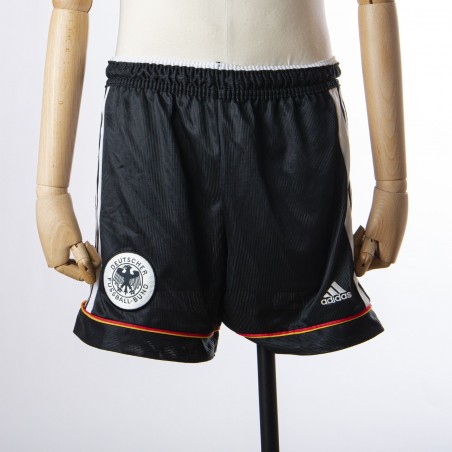 Shorts made by Adidas for the 1998 German national team, kept in excellent condition, with seams intact and bright colours

Manufacturer's label with size 5 inside.

On the front right leg Germany emblem embroidered on the edges.

On the left leg Adidas technical sponsor logo and lettering. 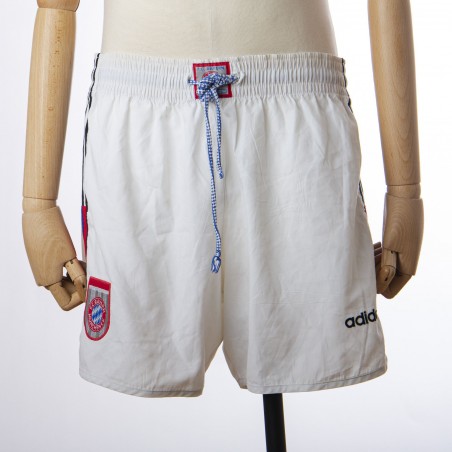 The Bayern Munich shorts made by Adidas for the 1996 Uefa Cup final are preserved in good condition with no colour discontinuity.

Drawstring waistband with regulating strap with FC Bayern Munich coat of arms label and lettering. On the lateral sides are applied the three adidas stripes and inserts in red and blue.

On the front right leg coat of arms with embroidered piping. On the left leg in embroidery lettering technical sponsor ADIDAS. 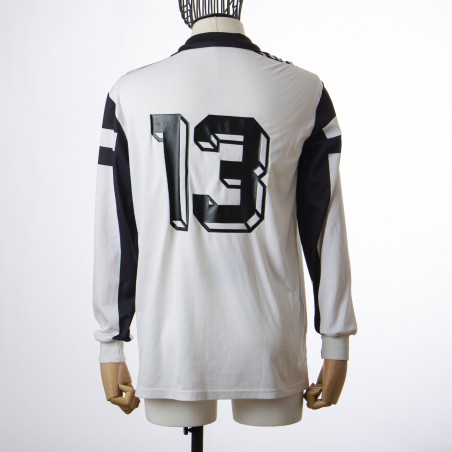 Cesena jersey, made by technical sponsor Adidas preserved in good condition, except for a few spots on the front.

Long-sleeved home model with V-neck and polo collar. Both the Cesena logo and the technical sponsor Adidas are sublimatically printed on the front.

The number 13 is applied on the back in light plastic. The commercial sponsor is Banca Popolare dell'Emilia Romagna. 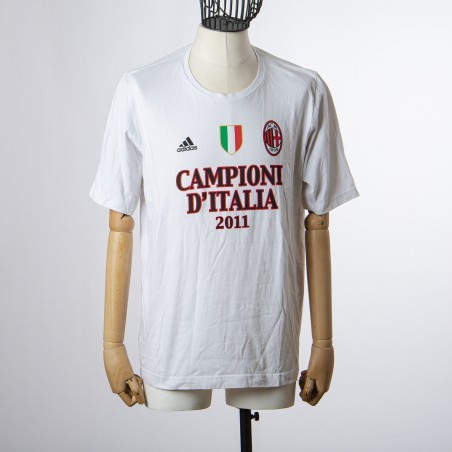 Inside is the manufacturer's label with size L.

Crew-neck T-shirt in white cotton with half sleeves.

On the front, sublimation prints of the Milan patch, the tricolor shield and the Adidas logo.

In the centre the writing Campioni d'Italia 2011 and on the back Milan is all in and the number 18.

This season saw the Rossoneri debut of Ibrahimovic, Boateng and Robinho.  The team finished the tournament with 82 points, winning the league title for the 18th time. 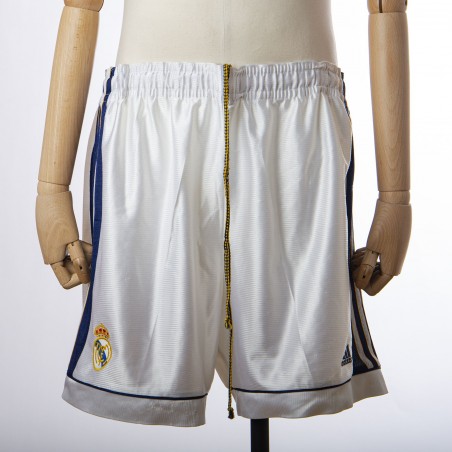 Shorts kept in excellent condition.
Does not present discontinuity of color.
The fabric is soft to the touch.
On the right leg the coat of arms in embroidery of the Madrid club.
On the left leg technical sponsor logo embroidery Adidas.
Internal label size L. 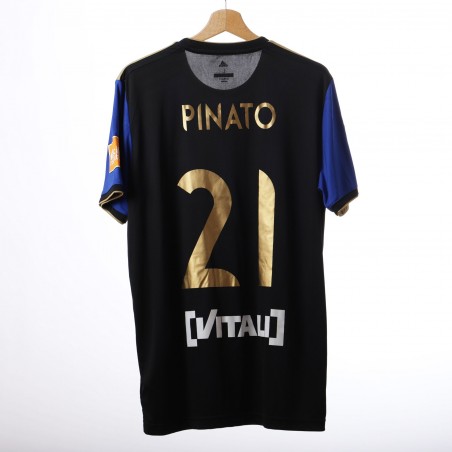 The jersey is well maintained, both in terms of the fabric and the colours. There are no signs of wear.

Inside there is also the manufacturer's label with the size L.

The Pisa patch is applied on the heart side in rubber, in the centre we have the Pisan Cross and, on the right, the embroidery of the technical Adidas logo.

On the back, on a black background is applied the customization in gold PINATO 21.

The jersey is then complete with a Serie B patch and Respect patch. 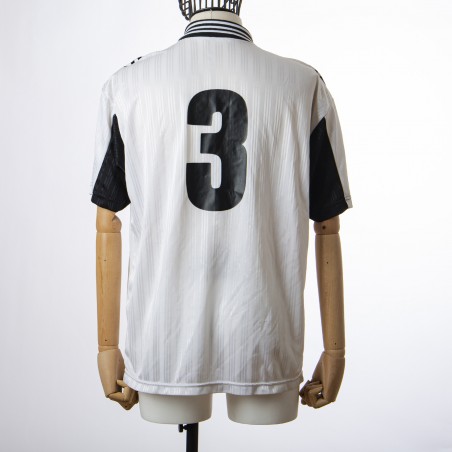 Cesena jersey made by Adidas with number 3 applied.

The AC Cesena jersey is kept in excellent condition. The black and white colours are bright and the fabric is soft and cool to the touch. Black collar with white piping
contrast, polo-style closure with button. Model short-sleeved competition shirt with intact piping. On the front side, the heart of the AC Cesena crest is sewn on and in the centre, just below the collar, there is embroidered lettering from Adidas, the technical sponsor. In the middle, the logo and lettering painted main sponsor CASSA RISPARMIO CESENA. On the back, the number 3 is applied in light plastic. XL size inner label. 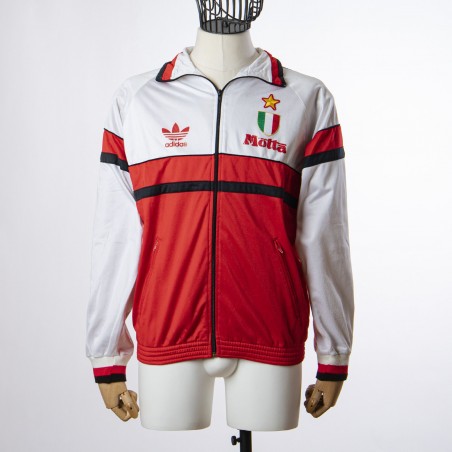 Milan vintage sweatshirt made by Adidas for the 1991/1992 season

Milan vintage sweatshirt kept in good condition.
It has no discontinuity of color.
The fabric is soft to the touch.
Full zipper model working.
Side pockets with zipper.
On the front side heart tricolor shield and star kitchen.
Right side adidas logo and lettering
On the back painted lettering main sponsor MOTTA. 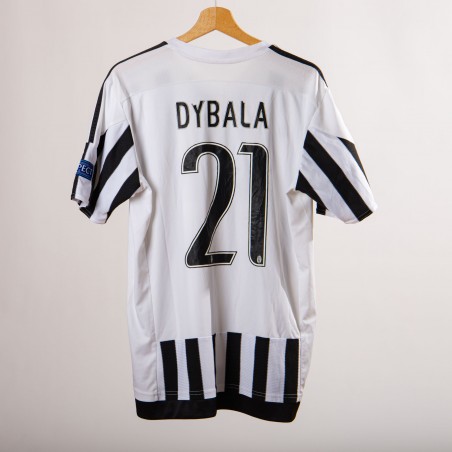 The Juventus home jersey is made in the typical corporate colors of black and white.

It has no discontinuity of color.

The seams are intact.

On the front side heart stitched Juventus crest and embroidered stars,

At the center is applied the tricolor badge.

Right side is applied to the Italy Cup cockade and the logo of the technical sponsor in embroidery Adidas.

Certainly at the bottom in light plastic main sponsor JEEP.

On the back print damaged DYBALA 21.

First season for the promising Argentine forward Paulo Dybala who, despite being a new signing, immediately makes room for himself at the club, becoming one of its mainstays. As soon as he was signed, in fact, he scored the second goal during the match against Lazio for the Italian Super Cup, contributing to the conquest of the title. 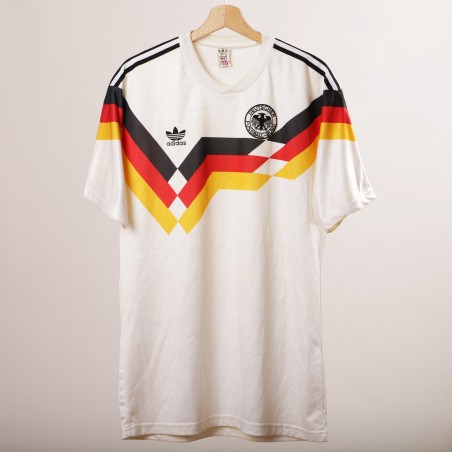 Home Jersey Germany made by Adidas for the World Cup in Italy '90.

The fabric is soft to the touch.

There are no discontinuities of colour.

The white and the red and black inserts are brilliant.

On the front there is a slight halo on the right shoulder.

Italia '90 saw a final with Germany as favourites and Argentina at a distinct disadvantage with an injured Maradona and with the absence of Caniggia, Giusti, Olarticoechea and Batista due to disqualification.

The final was won by Germany "I have never witnessed such torment as that of Germany-Argentina." Gianni Brera commented on the closing match of Italia '90. 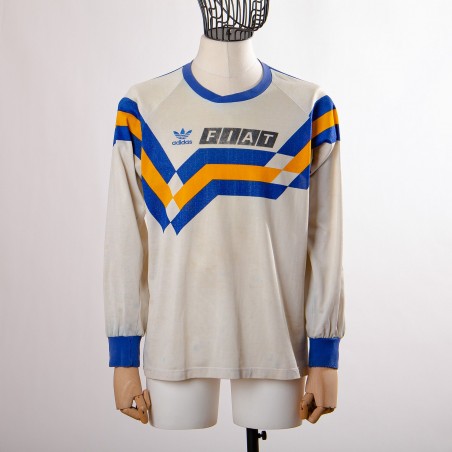 Second jersey of Boca Junior, from the 1991/1992 football season, with number 8 applied on the back.

Inside there is no size label, but the dimensions correspond to 70 cm in height and 59 cm in width.

White model with parts in blue and yellow.

On the front the commercial sponsor FIAT is sublimatically applied and the technical sponsor Adidas is embroidered.

On the back, the number 8 is applied in black velvet. 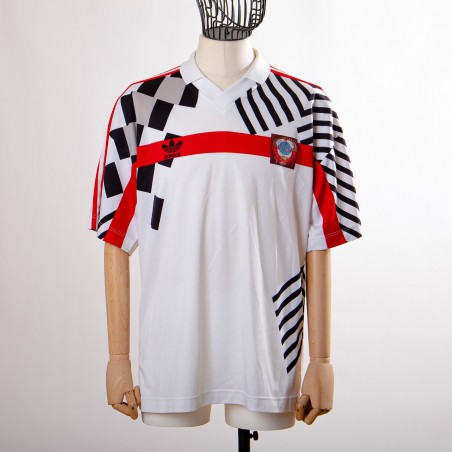 Away CCCP jersey made by Adidas year 1991.

Away version CCCP jersey kept in excellent condition like new.

It has no colour defects or discontinuity.

On the front side heart side CCCP crest sewn.

The national team of the Soviet Union was one of the strongest in history but its end came in 1991, when it became the national team of the Commonwealth of Independent States that also participated in the European Championship in 1992, the last international event before the independence of the various states and the dissolution of the Soviet Union.