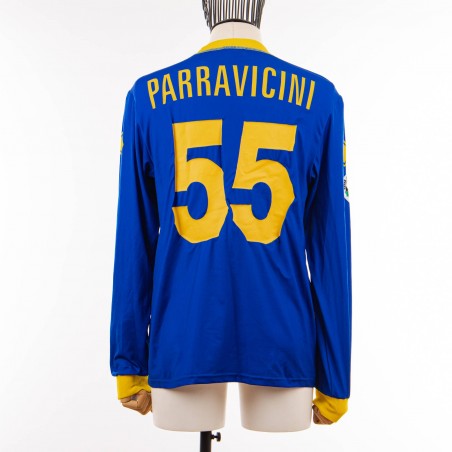 Parma long-sleeved away jersey made by the technical sponsor Errea, in collaboration with the commercial sponsors Gimoka and Play Radio, for the 2006/2007 season. Personalization with the number 55 Parravicini, size L. Model conforming to the conditions that can be inferred from the attached photographic evidence.

The Parma away kit is light blue with a yellow cross running forward across the entire model. The cuffs and collar in elastic fabric are yellow. On the chest you can see the brand of the technical sponsor Errea, the emblem of the sports club and the brand of the commercial sponsor Gimoka. On the heart side, however, the second commercial sponsor Play Radio is applied. The Errea logo is referenced on both sleeves, in yellow, but the patch of the Italian football league is sewn only on the right arm. On the back of the model, the personalization with the number 55 Parravicini in yellow can be read.

Former Milanese midfielder Francesco Parravicini made his Serie A debut in 2005 with Treviso, but wore the Parma shirt from 2007 to 2009, the club for which he made 33 appearances. 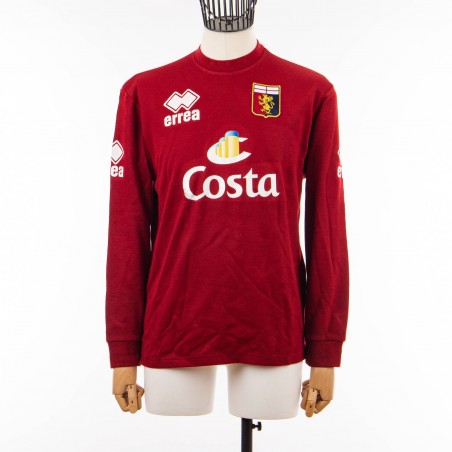 Genoa long-sleeved training jersey made by the technical sponsor Errea for the 2002/2003 season, in collaboration with the commercial sponsor Costa. Model compliant with the conditions that can be deduced from the attached photographic evidence. S size

The Genoa training jacket is completely burgundy and the emblem of the sports club is sewn on the heart side, while the logo of the commercial sponsor Costa can be read in the center. The logo of the technical sponsor Errea is applied to the right side, in white, reproduced in a larger format on the sleeves and on the back of the product.

In the 2002/2003 season the Ligurian team played in the Serie B championship finishing in 18th place, led by coaches Rino Lavezzini and Vincenzo Torrente. 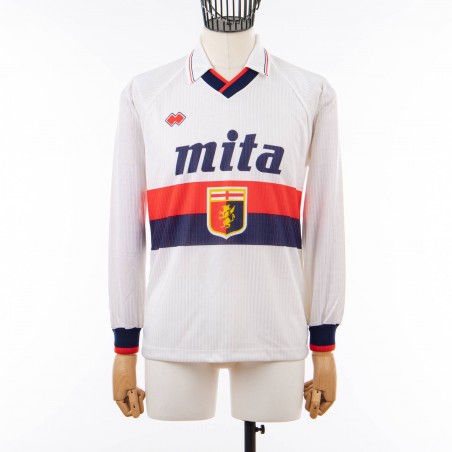 Genoa long-sleeved away jersey made by the technical sponsor Errea for the 1990/1991 season, in collaboration with the commercial sponsor Mita. Model compliant with the conditions that can be deduced from the attached photographic evidence. S size

The Genoa away jersey is white with two horizontal stripes, one red and the other blue, on the chest area, which embrace the entire circumference. The emblem of the sports club is superimposed on them, while the logo of the technical sponsor Errea is reproduced in red at the top right of the model. Still on the chest, however, the brand of the commercial sponsor Mita can be read. The cuffs, as well as the pointed neckline, are in blue jersey, edged in red. Finally, the collar is white, bordered by two thin stripes, one red and the other blue. On the back there is an empty box bordered in blue.

President Aldo Spinelli, in the 1990/1991 season, enlists coach Osvaldo Bagnoli on the Genoa bench and manages to achieve an extraordinary result, finishing in fourth place in the Serie A standings. 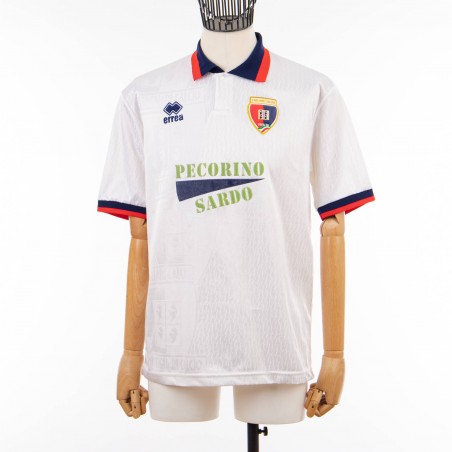 Cagliari short-sleeved away jersey made by the technical sponsor Errea for the 1993/1994 season, in collaboration with the commercial sponsor Pecorino sardo. Model compliant with the conditions that can be deduced from the attached photographic evidence. Size L

The Cagliari away jersey is white with the edges of the sleeves and the collar in red and blue stripes. The emblem of the sports club is sewn on the heart side, the logo of the technical sponsor Errea on the right side and that of the commercial sponsor Pecorino Sardo on the chest.

After coach Carlo Mazzone's performance on the Sardinian bench, in the 1993/1994 season the president Massimo Cellino made use of the coach Luigi Radice to face the Serie A championship. However, following a series of defeats on the Cagliari bench, Bruno arrived Giorgi and the season ended in twelfth place in the standings.

Sora short-sleeved home jersey personalized with the number 8. Model made by the technical sponsor Sport Point for the 2007/2008 season in good condition, as it retains all the original characteristics, except for some imperfections on the number print, on the back of the sjersey. XL size

The Lazio team's tunic is white with black inserts, as is the crew neck. The emblem of the sports club is sewn on the left side, while the technical sponsor Sport Point and the commercial sponsor Fiere di Sora can be seen in the center of the shirt. The number 8 is printed in black on the back of the jersey.

The A.S.D. Sora football was founded in 1907 and interrupted its activity due to the destruction of the city of Sora by the earthquake of 1915 and the First World War, to then reconstitute itself in 1920. Initially it played in the regional championships, then it was promoted to First Division, but in 1957 the team suffered a further stop following the economic bankruptcy of the company. After various vicissitudes, Sora resumed playing in the provincial and regional championships.

SS Nola track jacket made for the 1993/1994 season, in good condition, except for small imperfections in the fabric, which however do not affect the integrity of the product. Size not specified.

The tracksuit jacket of the Nola team is in yellow and blue, with a full zip closure in white. The emblem of the sports club is sewn on the heart side, while the technical sponsor Errea is visible on the right side. On the back of the product you can see the logo of the commercial sponsor Nusco Wooden doors. The cuffs and the band that ends the bottom of the jacket are in spring fabric.

The SS Nola bench in the 1993/1994 season was somewhat tormented, so much so that several coaches alternated: Francesco Scorsa, then Vincenzo Di Costanzo and finally Francesco Stanzione. The president Mario Felice Nusco gets only a sixteenth place in the C1 series standings. 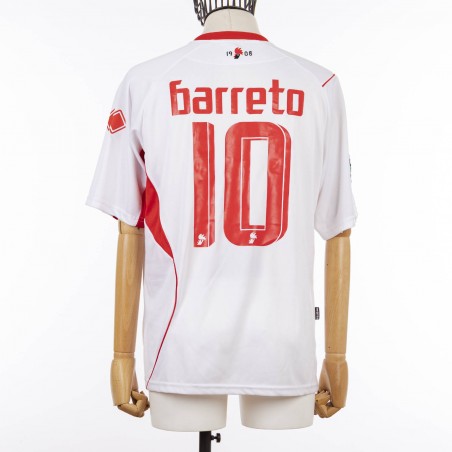 Bari short-sleeved home jersey, worn by number 10 Barreto and personalized on the front with the player's dedication and autograph. Model created by the technical sponsor Errea for the 2009/2010 season, in collaboration with the commercial sponsor RadioNorba, in excellent condition, except for the personalization print on the back of the shirt, which still appears legible. Size L.

The jersey of the Apulian team is white with red inserts, both colors taken up on the collar. The emblem of the football club is sewn on the heart side, the Errea brand is applied on the right side and that of RadioNorba in the centre. On the front there are also the dedication and autograph of the number 10 Barreto, name and number that also characterize the back of the jersey, with some imperfections. On the right arm you can see the brand of the technical sponsor Errea and the patch of the Italian Serie A football league.

The former Brazilian footballer Paulo Vitor Barreto has an Italian passport and began his experience outside his native land in Treviso, but also playing in other teams. Gifted with skill, technique and speed, he wore the Bari shirt from 2008 to 2011, appearing in 76 matches and scoring 41 goals. 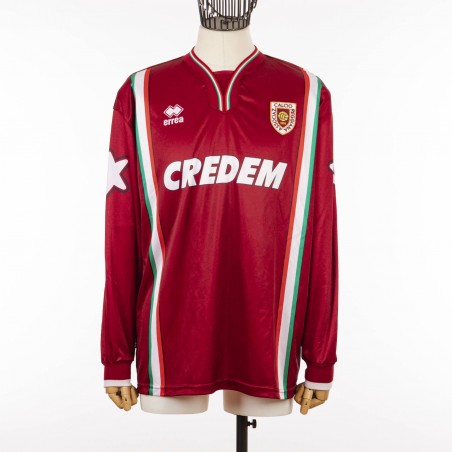 Reggiana home jersey with long sleeves and personalized on the back with the number 3. Made by the technical sponsor Errea and worn by the players in the 2002/2003 season. Model in excellent condition, without defects or streaks on the fabric. XL size

The Reggiana jersey during the 2002/2003 season is in the classic garnet colour, with two white stars bordered in black applied on both sleeves and tricolor bands running along both sides of the shirt, as well as the jersey collar. The emblem of the sports club is sewn on the left side, the logo of the technical sponsor Errea is applied to the right side, while that of the commercial sponsor Credem is applied in the centre. The number 3 is printed in white on the back.

In this football season, the grenade team plays in Serie C1 and the president Adriano Cadregari makes numerous purchases to satisfy his fans and their expectations: Giandomenico, Miftah, Federici, Bizzari, Catanese, Archetti. Despite the positive results achieved in the first round, at the end of the championship Reggiana ranks only in twelfth place. 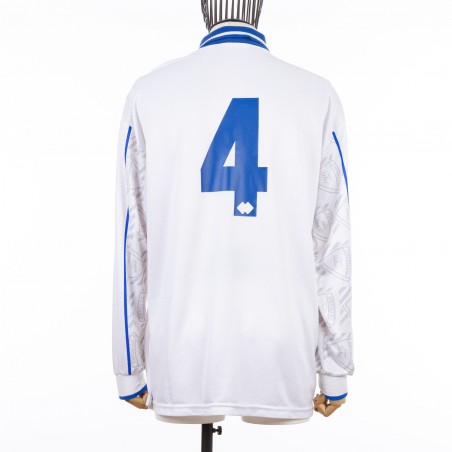 Empoli Away shirt made by the technical sponsor Errea for the 1997/1998 football season. I good state of conservation. Size XL

Long-sleeved away model in white with the club logo repeated in sublimation. Coat of arms, Errea logo and Sammontana commercial sponsor are flocked. Number 4 on the back. Polo collar and v-neck in knitwear. Arm patch 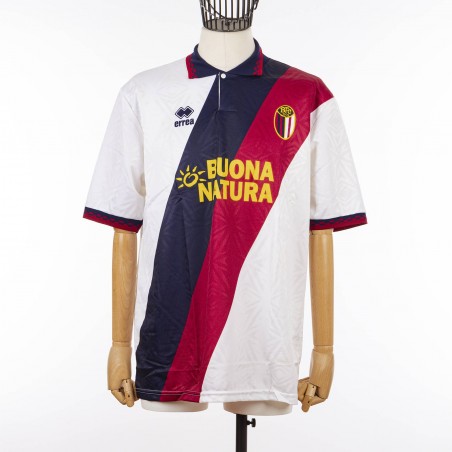 Bologna away jersey with short sleeves, made thanks to the contribution of the technical sponsor Errea and the commercial sponsor Buona natura in the 1993/1994 season. The model is in excellent condition, with no stitching, tears or halos on the fabric. Size not specified

The Bologna away jersey is white and has short sleeves, with a cross band in the colors of blue and red. The same colors are repeated on the edges of the sleeves and the jersey collar. The company crest is sewn on the left side, the logo of the technical sponsor Errea is seen on the right and that of the commercial sponsor Buona natura is in the centre.

In the 1993/1994 season, Bologna competed in the C1 football championship and coach Alberto Zaccheroni sat on the bench. The latter, following a crisis in the top management, is sacked and replaced by his colleague Edoardo Reja, who leads the rossoblu to fourth position in the standings. The midfielder Giuseppe Anaclerio, known as Pepè, lost his life in a tragic car accident. 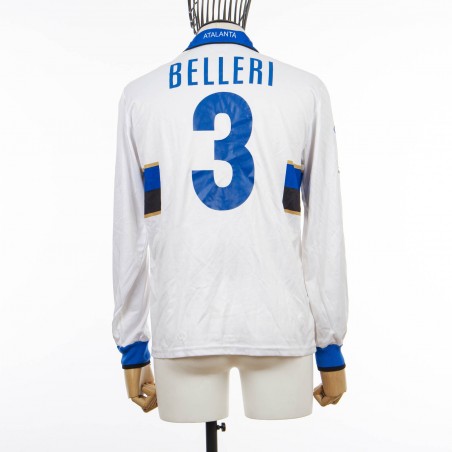 Atalanta away shirt made by Errea for the 2005/2006 football season. In excellent condition. Size L 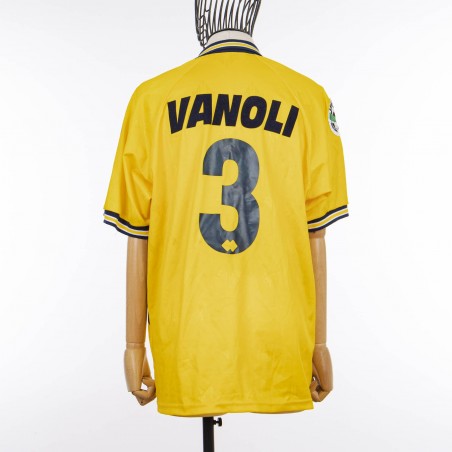 Hellas Verona short-sleeved home jersey, designed for the 1996/1997 season. It is in excellent condition, without defects, halos or chromatic alterations. Personalized with the number 3 Vanoli. Size XL

The jersey of the Verona sports club has a yellow background on which the lettering of the technical sponsor Errea stands at the top right and the logo of the commercial sponsor Ferroli in the center, as well as the coat of arms, in a large format, of Hellas Verona. The collar, resting on a V-neck, and the edges of the sleeves are in jersey with the colors of blue, white and yellow. The coat of arms of the Veneto team is sewn on the left sleeve, while the patch of the Italian Serie A football league is on the right. On the back, the model is personalized with the number 3 Vanoli.

In homage to the historical roots of the city of Verona, the Scaligeri coat of arms is recalled on the corporate brand. The Della Scala family ruled Verona between the 13th and 14th centuries and for this reason the players of the Venetian team are called 'i Mastini' and 'gli Scaligeri'.